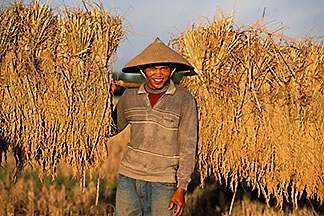 As we have already seen, rice occupied a very special place in traditional Sinhalese society. It was a community based on rice. Everyone from the king downwards had an interest in agriculture.

Each one was a cultivator. Every villager owned a piece of land as well as a paddy field. Even the richest man in the village would get down to the field and plough. Men and women, young and old, were in close touch with the soil. They never considered it a mean task to work in the field. On the other hand, they felt proud to be cultivators. Those who were involved in agriculture belonged to the ‘goigama’ caste just as much as others in different vocations belonged to a caste of their own.

Historians say that agricultural methods as practised to this day had been introduced by the Indo-Aryans who came to the Island. They cleared the forests and converted them to fields. They used the services of the local people to clear the forests and then introduced improved methods of agriculture they knew. They saw to it that the people were self-sufficient in food.

If a community did not produce the food they needed, they had to either perish or move to another area where they could get food. The staple diet even in those days was rice. The kings too began to show interest in agriculture since the people had to get their food.

In early times, rice cultivation took two forms. In one, forest land was cleared in patches and cultivated. These had to depend on rainfall, which was seasonal. The other was the cultivating of land, which got water from irrigation as well as rain. It was soon realised that water was needed for a proper and successful system of cultivation. There was thus a need to store the water to irrigate the paddy fields when there was no rain. The reservoirs came to be constructed in every important village settlement.

The great historian and archaeologist , Dr S. Paranavitana describing the agricultural practices in the early Anuradhapura period says: “Agriculture in ancient days, as it is today, was not confined to irrigated lands. Crops were raised during the rainy season on unirrigated land. Rice grown on such lands was more sought after than that from irrigated fields.

Other varieties of subsidiary food-grains, beans and pulses were grown on unirrigated fields; these products comprised an important and essential part of the people’s diet. The main edible oil was that extracted from sesamum,(‘tala’) also grown on high lands. Sugarcane was an important crop, and molasses formed an important item of the diet of the richer folk. The needs of clothing of the population were satisfied with the cotton grown locally. Varieties of fruit trees were grown, the mango receiving special mention. Coconut groves are mentioned in an early inscription as well as in literary works, and its nut was eaten when tender.

Cattle-breeding was as important an occupation as agriculture. The ghee extracted from the cow’s milk was regularly taken with rice by everyone except the poorest. Curd and other milk products formed important items of food”.

Mention is also made that products like turmeric (‘kaha’), ginger (‘inguru’), pepper (‘gammiris’) and spices (‘kulu badu’) were grown in hilly regions. There were fishing villages in the coast and also fish in inland waters was an important item in the diet of the people. Honey collected in the field was both a food item and a medicinal item.

Reservoirs built in important villages soon came to be enlarged and our irrigation culture began to develop. Small tanks were being built supervised by the ‘uparaja’, the sub-king. ’Tissawewa’ originally known as ’Tissavapi’, was constructed by King Devanampiya Tissa in the third century B.C. By the first century B.C, the village tank was a well established feature in the Dry Zone.

Historical evidence points to the existence of two methods of irrigation. One is where small, permanent, stone dams as well as temporary dams out of timber and clay were built across streams to divert water to canals, which took the water to the fields. The other was the erection of village tanks directly irrigating the fields. The village tanks had been owned by individuals. (@ Sunday times)