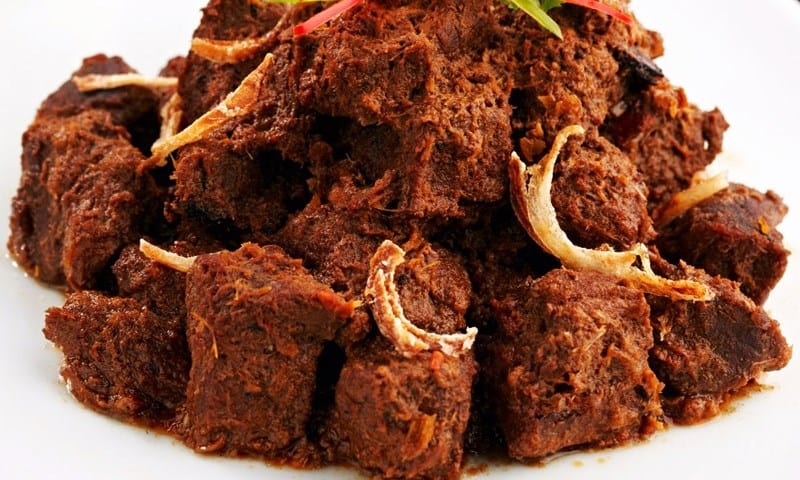 One of Indonesia’s renowned and universally popular beef dishes is beef rendang, a slow-cooked dry curry deeply spiced with ginger and turmeric, kaffir lime and chilis. You’ll also find chicken, vegetable, and seafood rendang as well. It is also very popular in nearby Malaysia. When prepared in Malaysian style, there are sweet, sour, and savory elements, and the curry is infused with a coconut richness, combined with a slight tanginess from asam keping (slivers of a sour sun-dried fruit).

There are two givens; if it has a sauce, its not Rendang, and Rendang always tastes better the folowing day. It was originally a technique for preserving meat prior to the era of refrigeration. When farmers killed and butchered cattle on special occasions, some portions of it were made into Rendang. The spiciness is no accident as chili oil has antimicrobial properties. By cooking until dry, the low moisture content and relatively high fat content enabled beef to last for weeks in the tropical heat and humidity.

Overall, there’s a significant list of ingredients, but that’s coupled with a very easy cooking procedure:

It’s not a quick dish, but the flavors build and combine to make the lengthy cooking time well worth every minute!

Authentic Malaysian-style Rendang is a spicy meat dish which has evolved among the Minangkabau ethnic group of Malaysia, but is now commonly served throughout the country. Characteristic of the Minangkabau cuisine, it is invariably served at festive and ceremonial occasions, wedding feasts and Hari Raya. Culinary sources describe rendang as “West Sumatran caramelised beef curry”. Rendang is a favourite throughout the Malay communities of Malaysia, Singapore, Brunei and Southern Philippines.