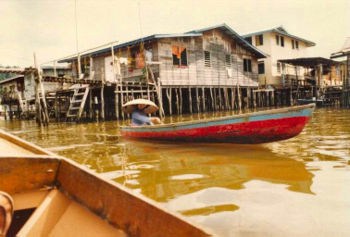 The Water Village (Kampong Ayer) is a district of Brunei’s capital city Bandar Seri Begawan. 30,000 people live in the Water Village. This represents roughly ten percent of the nation’s total population. All of the Water Village buildings are constructed on stilts above the Brunei River.

The Water Village consists of over 3000 structures including homes, mosques, restaurants, shops, a school, and a hospital. 36 kilometers of boardwalks connect the buildings. Private water taxis provide rapid transit. Most of these taxis resemble long wooden speed boats. From a distance the water village looks like a slum. It actually enjoys modern amenities including air conditioning, satellite television, Internet access, plumbing, and electricity. Some of the residents keep potted plants and chickens. The district has a unique architectural heritage of wooden homes with ornate interiors.

People have lived in Kampong Ayer for over 1300 years. Antonio Pigafetta dubbed it the Venice of the East when the fleet of Ferdinand Magellan visited in 1521. [1] The district is a culturally important part of Brunei that preserves the nation’s river dwelling origins. According to geography professor Abdul Aziz of the Universiti Brunei Darussalam, this is the largest and most famous water settlement of Southeast Asia. “It was historically the very core of Brunei and one of the most important centres of trade in Borneo.”  *Wikipedia