About 1,800 years ago, during the Eastern Han Dynasty(25-220), Cai Lun improved Chinese papermaking techniques using bark and hemp. This then became one of the four great ancient inventions of China. Today, ancient papermaking has been replaced by modern means of production, but in some places in southwestern China’s Guizhou Province, where many people of ethnic-minority groups live, this ancient technique is still practiced.

In Huishui, Changshun and Danzhai near Guiyang, capital of Guizhou, many papermaking workshops are well-preserved. Of them, the biggest is the one in Dongkou Village, Lushan Town, Huishui County, some 80 kilometers south of Guiyang. 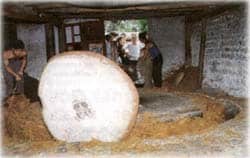 At Dongkou Village, where Bouyei people live, we can see an open dam through which a limpid river flows, and flocks of ducks are seen sporting and playing in it. On the banks Bouyei women in groups of two and three wash clothes. All are quiet, leisurely and carefree.

Looking down from a high place, we can see large and small steaming and boiling kilns, fermenting pools and lime pits scattered all over like stars in the sky, as if to tell and sing a story of long, long ago. Near high and low thatched cottages are papermaking workshops and a water-powered mill wheel.

The local records say that the papermaking industry there began 300 years ago, in the late Ming and early Qing dynasties. Later it flourished during Qing emperor Qian Long’s reign(1736-1796), and the number of papermaking households increased from three to a dozen. Every household had eight kilns, with a monthly rough-straw paper (or toilet paper) output of 150 kg. At that time, hand production included husking bamboo and hemp with pestles and mortars. Today, such primitive means of production can still be seen in Xieyao Village, Changshun, 30 kilometers from Huishui.

In the early 20th century, Dongkou’s papermaking industry spread to more than 100 households. The husking of bamboo and hemp was then done by water- or ox-powered roller. In the 1940s, papermaking there became more flourishing, and production spread to 150 households, with a total of 300 kilns. The number of papermaking workshops grew to 180, grinding 1.5 million kilograms of bamboo raw materials a year with 60 rollers. Its annual output was 0.5 million tons of rough-straw paper. Today, both rough-straw paper and paper money are good sellers in all corners of the province.

To make rough-straw paper takes two kinds of bamboo as raw materials, with the addition of birch leaves, lime and water. Generally, the paper, called zhuma(bamboo hemp), is clean and is a good absorbent. One special use is for putting under corpses. 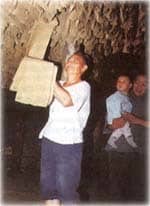 Birch leaves are necessary materials for papermaking. The mucilage is drained out of the leaves for strengthening the adhesion of the paper, and for improving its smoothness and evenness. First, bamboo is husked with a pestle and mortar. It is then placed in a pool of lime to soak for several days to make it soft. It is then put into a big kiln for steaming and boiling for 35 days. after being rinsed in river water, it is again steamed and boiled for another ten days before being ground into pieces and put into a pool of pure water. After mucilage from birch leaves has been added, it is then strained. The residue is the pulp raw material.

Originally, papermakers used bamboo curtains to hang the sheets of pulp on till they dried to the constituency of damp paper. Later, the remaining water was squeezed out.