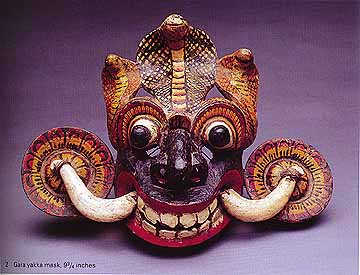 A MIDNIGHT ceremony. Crowds milling, bodies slick with sweat in the tropical night. Torches lining an earthen arena. A patient is dazed with illness, propped on a low seat. The rhythmic beat of drums. The smell of smoking resin. A figure enters, back first and the rhythm of the drums changes, intensifies. The figure whirls and the patient is suddenly presented with the face of his tormentor!

The yakun natima, or devil dance ritual of Sri Lanka, is nothing if not full of drama. Not just a charade or interval designed to entertain, the yakun natima is a carefully crafted ritual with a history reaching far back into Sri Lanka’s pre-Buddhist past. It combines ancient Ayurvedic concepts of disease causation with deftpsychological manipulation. Lasting up to twelve hours, it mixes raucous humour with deep-rooted fears to create a healing catharsis for both patient and community. 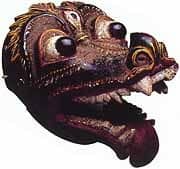 But while the beating of the bereya drums, the torchlight, and the smoky resin contribute to the aura of the night’s magic, it is the masked face of the edura, or exorcist/shaman, that personifies the power of the moment-the devil incarnate (1). It is the mask or vesmuna which localises the fears and anxieties of both patient and audience. To the Sinhalese, it is this face, carved of wood, with bulging eyes, protruding nose and gaping mouth, disfigured and fierce, which represents both cause and cure (2).

For the ethnographer, the traditional belief systems and practices surrounding the yakun natima and other 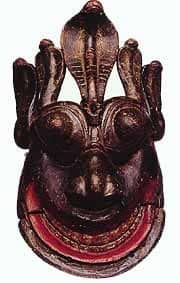 Masked dance rituals of Sri Lanka’s southern coast provide a rich and fascinating field for research. For the collector, these ritual masks represent a sophisticated folk art form; beautiful and mysterious. Carved of wood and pigmented with natural hues and resins, these masks are infused with a spirit and animation which command attention. The patination of a ritual mask, darkened by years of use, and the repairs upon repairs of cherished examples bespeak their importance within their village communities. Within the context of the dance they are hypnotising. Taken out of that context and viewed on their own they are masterpieces of a rich folk art tradition (3).

To look at a complete collection of late nineteenth century ritual dance masks provides insight into the imagery and beauty that are the essence of these powerful spiritual talismans. 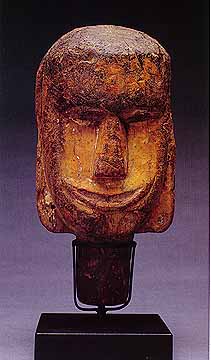 Lanka, the land foretold by the Buddha to be the stronghold of Buddhism in the time to come; Ceylon, a colonial outpost for the Portuguese, Dutch and British in succession; the Spice Isle, source of teas and spices which titillated the world; Screndip, an almost mythical paradise. Sri Lanka, home to some of the world’s most beautiful landscapes and the scene of seemingly endless turmoil and bloodshed, has had many names and wears many faces.

The medical systems of the Sinhalese have been renowned since the first century B.C. when the northern capital in Anuradhapura boasted some eighteen hospitals. Traditional Ayurvedic principles practised for centuries-balancing internal humours to promote and modify health-are now being studied and implemented by many Western healthcare professionals. But predating these systems, and stretching far back into antiquity, there has been an alternative system of healing, a system based on early Vedic concepts of aetiology, in which diseases and ills of all sorts were believed to be caused by demons. Identified predominantly by the symptoms manifested by the patient, these demons could be summoned and exorcised in stylised ritual mask dances, or natima. 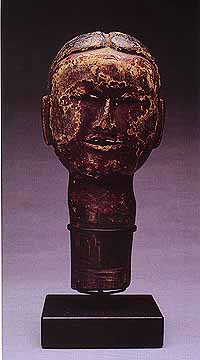 The various natima of Sri Lanka belong to that great Asian mask tradition which extends from the Indian subcontinent, across the high Himalayas, through the Southeast Asian archipelago, northwards onto the Siberian plains and into Korea. Within these diverse cultures the masked shaman plays a central role, bridging the gap between the natural and the omnipresent supernatural. Through various transformation rituals the shaman blurs these perceived boundaries, comforts his community, diverts evil and effectuates healing.

In Sinhalese society the edura works alongside the rest of society. He wears no special clothes, as a monk would, nor is he granted special status. He lives within the community with no divisions. It is only when his special services are required that the edura sets himself apart. Much of the preliminaries and ritualised aspects of the masked dance rituals are designed to distance the edura from the rest of society. 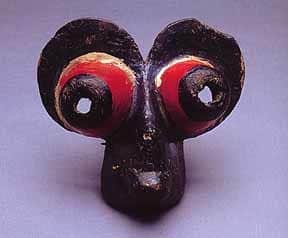 Through a complex and sophisticated mixture of theatre and drama, which includes wearing special clothes, burning his own body and simulated death experiences, the edura creates a space where in his mind and in the mind of his fellow villagers he "becomes" something other and takes on the essence of and personifies the afflicting demon.

Most important to this transformation both visually and psychologically are the fantastic masks worn during these rituals. Representing specific demons and the maladies they inflict upon man, the masks allow the edura to embody, at least temporarily, demons which normally exist only on a supernatural plane. This personification allows for dialogue and, amidst frenzied dance and ritualised chants and speeches, provides an opportunity to discuss the troubles facing the individual and the community. The edura, cloaked in the power and visage of the demon, creates a visible and immediate link between the natural and the supernatural. As the embodiment of the afflicting demon he cites causes for disease, discusses immediate concerns for the community, and following the reception of a tribute, he promises to lift the illness: tindui nivarani ("it is done"). 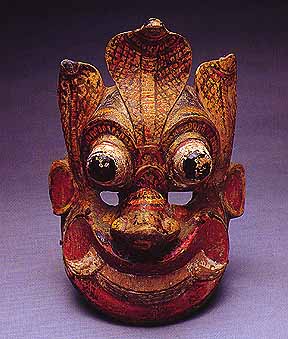 The cosmology of traditional Sri Lankan beliefs is a complex mixture of native Vedic gods, spirits, and demons, overlaid with imported Hindu and Buddhist deities, beliefs, and practices. This pantheon is vast, filled with hierarchies and sub-hierarchies which the uninitiated finds nearly impossible to grasp. The synthesis is a spiritual landscape where Buddha reigns supreme, but where the day-to-day is fraught with danger from the yakku (devils) and other malignant forces (vas) which seem all too ready to afflict man with scourges of every description. In this word, life is a constant struggle against these forces.

Central to this struggle are the natima devil dances-masked dance ceremonies to cure diseases, help failing crops (4), prevent drougth, and provide protection for troubled pregnancies (5). A cast of specific characters and dramas have developed over the centuries to counteract almost every affliction and ailment. The yakun natima, and the kolam natima (masquerade dance) represent two of the historically prominent forms these dance rituals have taken. Masks used in these rituals provide wonderful insight into the belief systems and practices which form the core of traditional Sinhalese beliefs regarding health. 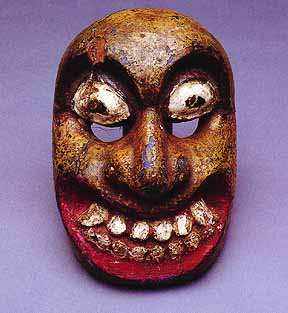 Of all the dance rituals, the yakun natima focuses most directly on healing. In Sinhalese thought diseases are either caused by the natural or the supernatural. In the case of the natural, traditional Ayurvedic and/ or medical avenues are pursued. In the case of the supernatural, or where the other systems fail, they have traditionally turned to the edura for aid through such rituals as the yakun natima.

In both cases, however, it is the cause rather than the symptom that must be addressed. And in the case of the supernatural it is the yakku demons that are the cause (6). Collectively, these disease-afflicting demons are known as the sanni yakku. They are a group of demons who, in past battles with the Buddha, were ultimately banished from earth. Living under the loose control of their king Vesamuni (from which the term for mask, vesmuna, is derived), the yakku are unable to appear physically upon the earth, but retain the power to afflict, and through the influence of the Buddha, to heal. 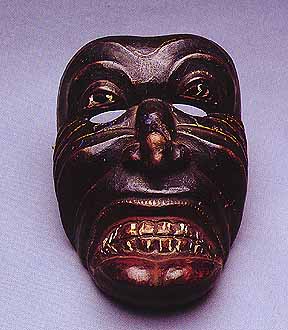 Every demon has an identity, a story. Unlike among the Balinese, where demons often represent types (i.e., hero, villain, clown, etc.), the Sinhalese yakku represent individual demons whose lineages and exploits are recited and commemorated. The masks used in the various rituals are carved to represent particular demons and can, with some exceptions, be specifically identified. Although the yakku. seem limitless in number, there is a core group of eighteen which form the focus for the yakun natima rituals.

Known as the daha-ata sanni yakka, these demons represent specific afflictions, both mental and physical, which commonly afflict the Sinhalese villagers. Although the number eighteen has now become standard, indications are that this number has decreased over time. Nor are the identities of the eighteen consistent. Different areas, or even different communities within the same area, will count different demons among the list. 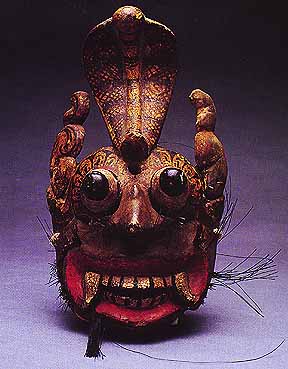 Surveys by individuals such as Alain Loviconi and E.D.W. Jayewardene, have demonstrated significant differences between various areas and the impossibility of creating a universally recognised list. One area might include 0lmada sanniya (babbling) and another area Avulun sanniya (breathing difficulties, chest pains). Contemporary ethnographers such as Obeyesekere have also noted the addition of certain more contemporary maladies to the list. For example Vedi sanniya as relating to gunshot wounds, dramatically reflecting the change in times and the adaptability of this indigenous system. 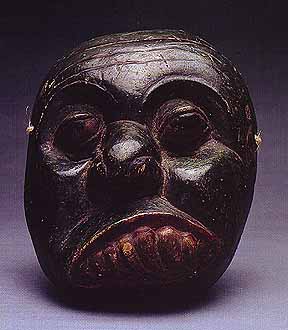 Although there is no single, uniform list or all eighteen demons, certain demons do seem consistent and universal, such as Biri for deafness, Kana for blindness (9), and Golu for dumbness.

Presiding over these eighteen yakku is the demon known as the Kola sanni yakka (10), a composite demon containing and regulating the other eighteen. In the yakun natima it is appeasing the Kola and gaining his benediction that is most important. His origin story, as recorded by Wirz, is as follows:

A certain king left for a great war, leaving behind his queen. He was unaware that she was pregnant. Upon his return he found his wife to be in an advanced state and ready to give birth. A handmaid to the queen, through lies and deceptions, convinced the king that it was not his child but that of the war minister, who had remained behind. In a fury he ordered the queen tied to a tree and cut in two. The child managed to survive, living off the remains of his mother. As he grew, the child vowed revenge on the father. 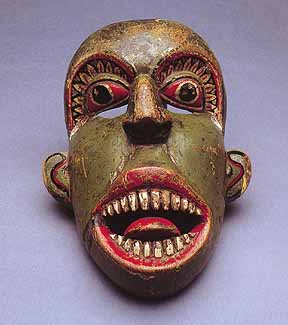 He gathered poisons from the different parts of the forest and formed them into eighteen separate lumps which transformed into demons. Kola sent these demons into the city and charged them to “capture humans and cause illness through wind, phlegm, and bile”.