Learning how to cook with a wok like a professional takes time and practice. Here are some hints and tips to help.

If you have an electric hot tray, it is excellent for keeping dishes warm.

Woks are inventions of necessity: in lands where fuel is scarce, foods must be cooked quickly. The semi-spherical curve of the wok permits maximum cooking surface based on minimal fuel contact. This explains (in part) why foods destined for the wok are routinely chopped into small, thin slices. They cook faster that way. Knowing how to cook with a wok gives you mastery of the ultimate tool of kitchen convenience, as it can be used to boil, sautee, stir-fry, deep-fry and steam. As one pot cooks all, clean-up is likewise minimal. According to the food historians, woks have been around for about two thousand years.

“Wok is a Cantonese word; the Mandarin is kuo. The wok appears to be a rather recent acquisition as Chinese kitchen furniture goes; it has been around for only two thousand years. The first woks I know of are little pottery models on the pottery stove modes in Han Dynasty tombs. The same sort of pan is universal in Indian food recipes preparation. Also across Southeast Asia, were it is known as a kuali in several languages, I strongly suspect borrowing (probably from India via Central Asia) – kuo must have evolved from some word close to kuali. Once you learn how to cook with a wok, you realise that it is virtually indispensable for stir-frying, and this I infer that this cooking technique was a Han invention, perhaps also borrowed or adapted from a borrowed technique. The great virtue of a wok, and its main special function in south Asia, is that when food is stewed in a a wok the liquid evaporates very fast, because the surface-to-liquid ratio is high and the smooth curve of the wok sides allows flame or heated air to rise rapidly, smoothly, and evenly along all the vessel.

The wok may well have evolved as a tool for making curry, in which a reduction of liquid to a thick gravy or even a crust is generally desired. The fact that the wok is also perfect for stir-frying must have been appreciated for a long time as well. The smooth, even distribution of high heat is the wok’s second vital, distinctive feature. This allows, among other things, a tremendous saving of fuel–few pans are more economical. A Wok should be thick and made of a rather slow-heating substance; otherwise it is hard to prevent the food’s burning to the bottom of the pan. The original woks were almost certainly of pottery; pottery pans of similar shape with wide , shallow covers are used in Southeast Asia for slow liquid-reducing stewing. Today, good woks are made of cast iron…The old soft-iron wok, like its Western counterpart, the cast iron skillet, also added a good deal of iron to the diet, since some iron dissolved into the food.”

” Chinese cooking is the cooking of scarcity. Whatever the emperors and warlords may have had, the vast majority of Chinese spent their lives short of fuel, cooking oil, utensils, and even water’, comments anthropologist E.N. Anderson. This points to the use of braziers. Originally made of pottery, these are now often galvanized buckets. While foods are frequently boiled and steamed, the brazier also offers the most famous Chinese method, stir-frying or ch’ao. The division in Chinese cooking between fan and ts’ai–the rice (or other cereal) and its accompaniment–is reflected in the modern kitchen with the rice cooker and the wok (Cantonese) or kuo (Mandarin). The wok is the standard curved pan ideal for stir-frying, as well as for deep-frying, boiling and, with racks in it, steaming. Its main function in south Asia (where it is known as a kuali in several languages) is quick stewing and evaporation. Stir-frying is likely to have been a Han invention, which makes it about 2000 years old. Although it is not directly mentioned in the texts, Anderson infers this from the great stress on slicing foods thinly and evenly and the presence of a pottery model woks in the archaeological record. He also mentions models of large kitchen ranges with apertures for the curved bottoms of woks.”
—A History of Cooks and Cooking, Michael Symons [University of Illinois:Urbana] 2000 (p. 78)

“Characteristic of cooking in the home is the chopping of ingredients into uniform small pieces, followed by their rapid cooking, usually sauteeing in a semi-spherical iron skillet or wok. The cooking is done with little fat but with a gamut of seasonings dominated by soy sauce, fresh ginger, scallions, sesame oil, Chinese vinegar, fagara, and chili peppers. Important in mastering how to cook with a wok, such preparation of food makes for a remarkable economy of effort. In addition to a rice cookery, all that is needed to prepare any dish is a chopping board–a simple tree “slice” 5 to 10 centimeters in thickness–a cleaver, the wok, and a cooking spatula. In the city most people cook on a gas ring; in the countryside they have a brick stove with several holes on the top so that the wok can be placed directly over the flame. Since fuel is scarce and expensive, it is always used sparingly, which has given rise to the widespread practice of quick stir-frying over high heat.”

How to Cook with a Wok – the expert chef explains!

If you need more information on how to cook with a wok, I suggest you ask your librarian how to find books on Chinese food recipes.

Another piece I found somewhere…

My Grandma used cast iron cookware almost everyday. She actually preferred it over the expensive set of pots and pans that were seldom used. “The good stuff” as my Grandpa called it was stored in the back of a cupboard and succeeded quite well, at taking up space.

I believe that there is no middle ground when it comes to consumer opinion, in regard to cast iron cooking. Either you love it or you hate it. At the time of this writing, I’m still trying to decide which side I’m on.

The key to successful cast iron cooking is proper cleaning and seasoning of the pan. This needs to be done to both new and inherited pieces. Don’t discard cast iron that has rusted or is caked with old grease. With a little work, these pans are actually better than new!

To clean an extremely greasy pan, the simplest method is to spray it with oven cleaner and place it in a plastic garbage bag. (Use rubber gloves and some type of eye protection any time you are working with oven cleaner.) Let the pan sit for 2-3 days. Remove from bag and scrub with a brass-bristled brush. Repeat the process if grease still remains, after this cleaning. When pan is free of baked on grease wash with hot, soapy water. Towel dry. Heat in oven or on a burner till completely dry. Now the pan is ready to season.

The best way to remove rust from a cast iron pan is with a Brillo© pad or metal brush. Thicker patches of rust can be removed with the edge of a sharp knife blade. Other methods such as using a drill with wire wheel attachment is easier, but can change the appearance and surface texture of the pan. After all rust has been removed wash with hot, soapy water. Towel dry, then dry completely in oven or on stove top. Season pan.

(Although I have not tried it, I have heard that Coca-Cola© will remove rust from cast iron. Fill pan with Coke. Let it sit for several hours. Wash with hot, soapy water. Dry completely. Season.)

If you look closely at a new cast iron pan, you will see that the surface is very porous… almost pitted. Seasoning it gives it what resembles a “non-stick” surface. When food sticks to your cast iron, it has not been properly seasoned. New pans are gray in color. It is only after repeated use that they turn black. This is a very normal process.

To season cast iron, pre-heat the oven to 325º. Heat pan for 15 minutes. Remove pan and apply a thick coat of shortening. Wipe away excess with paper towel and return to oven for 10 minutes. Repeat process till paper towel no longer shows gray residue, after wiping pan. If using pans with wooden handles, season on top of stove. Cast iron should be re-seasoned after each use. 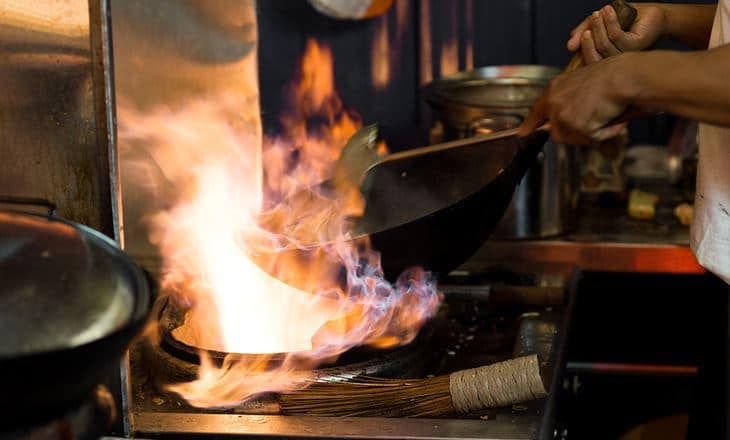