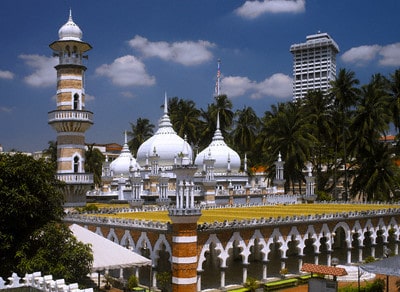 Etiquette and Customs in Malaysia

Greetings in a social context will depend upon the ethnicity of the person you are meeting. In general, most Malays are aware of Western ways so the handshake is normal. There may be slight differences though and a few things to bear in mind include:

? The Chinese handshake is light and may be rather prolonged. Men and women may shake hands, although the woman must extend her hand first. Many older Chinese lower their eyes during the greeting as a sign of respect.

? Indians shake hands with members of the same sex. When being introduced to someone of the opposite sex, nodding the head and smiling is usually sufficient.

Among all cultures, there is a general tendency to introduce:

The way names are used also varies between ethnicities:

Many Malays do not have surnames. Instead, men add their father’s name to their own name with the term “bin” (meaning son of). So Rosli bin Suleiman, would be Rosli the son of Suleiman.

Women use the term “binti”, so Aysha bint Suleiman is Aysha the daughter of Suleiman.

Many Indians do not use surnames. Instead, they place the initial of their father’s name in front of their own name. The man’s formal name is their name “s/o” (son of) and the father’s name.

Women use “d/o” to refer to themselves as the daughter of their father.

If invited to someone’s home, bring a small gift of fruit, sweets, or cakes, saying that it is for the children.

Business Etiquette and Protocol in Malaysia

Within the business context most Malaysian businesspeople are culturally-savvy and internationally exposes. Your experience may very well depend upon the ethnicity, age, sex and status of the person you are meeting. The best approach is always friendly yet formal. A few tips include:

As an extension to the need to maintain harmonious relations, Malaysians rely on non-verbal communication (i.e. facial expressions, tone of voice, body language, etc). Such a communication style tends to be subtle, indirect and. Malays may hint at a point rather than making a direct statement, since that might cause the other person to lose face. Rather than say “no”, they might say, “I will try”, or “I?ll see what I can do”. This allows the person making the request and the person turning it down to save face and maintain harmony in their relationship.

If you are unsure about the affirmative response you received, you may want to continue the discussion, re-phrasing the question in several different ways so that you may compare responses. If the response was given because the Malaysian did not know how to respond in the negative without causing offense, this may come out. Alternatively, they may have someone else give you the bad news.

Silence is an important element of Malaysian communication. Pausing before responding to a question indicates that they have given the question appropriate thought and considered their response carefully. Many Malaysians do not understand the Western propensity to respond to a question hastily and can consider such behaviour thoughtless and rude.

Malaysians may laugh at what may appear to outsiders as inappropriate moments. This device is used to conceal uneasiness.

Do not show anger in public as it makes Malaysians uncomfortable and creates a feeling of powerlessness. There is a greater chance of achieving a good outcome id you are calm, whereas little is resolved by shouting.