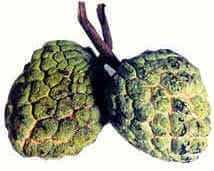 Known internationally as sweetsop, sugar apple or custard apple, the Atis is one fruit you can easily grow even if you have only a square meter of soil. The atis tree grow just about anywhere a seed falls. And it grows fast so that you can get to harvest fruits in a little over a year from seedling stage. A tree bears fruits about three times a year: in the summer, during rainy season and towards Christmas. The best batch of fruits, those with thicker and sweeter flesh, comes out in the summer.

And if you’re interested in growing an atis tree in your backyard, here’s a warning: bats and birds love the fruit. This means that you have to harvest the fruits once these are mature. Don’t wait for the fruits to ripen (which would actually give you the sweetest type of atis) as the bats and birds may beat you to that one big fruit you’ve been reserving for yourself.

The taste is sour but not acidic, a tartness that promotes saliva in the mouth without impacting on the stomach, the way vinegar or even kalamansi often does. This is the kind of sourness only batwan can deliver. An important part of the souring arsenal of cooks in Negros Occidental and some parts of Panay, batwan is actually found in abundance in Bohol and Mindanao. However, there is no tradition of eating this fruit in these places said Ponchit Ponce-Enrile, general manager of the Eduardo Cojuanco, Jr. and Sons Farms in Negros Occidental. It seems that only Negrenses and cooks in certain parts of Panay have discovered the flavors of batwan. Batwan is close cousin of mangosteen, being under the genus garcinia. And indeed, they have similarities; batwan actually looks like green and stunted mangosteen.

Usually selling between P30 to P40 a kilo, seasonal batwan can command as much as P80 a kilo when it disappears from the markets, which cannot be forecasted. The manner to propagate batwan has remained a mystery, except in the ECJ and Sons farms here in Negros Occidental, where some 10 hectares have been planted to this fruit in what could very well be the country’s first batwan plantation. Ponce Enrile said salting is one way of preserving batwan. However, while this traps its one of a kind sourness, it also retains its saltiness.

Don’t ignore these purple berries this summer when they’re aplenty. And if no one has yet shown you how to eat duhat properly, read on. Put ripe berries in a deep bowl, wash them in running water then drain. Sprinkle with salt, cover the bowl with a plate and shake the bowl vigorously for about 30 seconds. Remove the plate cover. Note that you’ve practically made a mess in the bowl but no matter. Place a berry one at a time on your tongue and bite on the fruit tenderly. Utmost pleasure, really. But beware – the color stains clothes so eat carefully.

The local orange. Or what’s left of it. In the ’60s, we had a variety of local oranges that were big, juicy and sweet. The ladu variety, which was common then, had a deep green and orange peeling that had the shape of, but was much bigger than, the ponkan. A really special variety which delighted many people was the suwikom variety, which had very firm but very sweet pulp bits. There were many varieties that grew in Batangas. Too bad a pestilence killed these oranges trees in the late ’60s. Now we’re left with these small fruits that are often too sour for eating, but are very juicy and perfect for making into juice.

The local lemon or lime. Among traditional cooks it is the critical flavoring for leche flan and macapuno because it keeps the rich desserts from being too sweet. I put a slice of dayap into my glass of Coke and noted that my soda had a fuller, heartier taste. Dayap is also said to be the equivalent of key lime, which grows in Florida and is often made into pies. I met an elderly woman in Bulacan who said that she sculpts the dayap rind before pickling the fruits when these are in season. I should see that work of art.

Very popular as a souring agent is the kalamansi. This little green lime, which is indigenous to the country, plays a giant role in Philippine cuisine. It is squeezed into juice and punches, into hot tea, over pansit, into arroz caldo, over charcoal-grilled fish, over kinilaw, and is an important ingredient in innumerable dipping sauces (sawsawan). When used as a sawsawan, kalamansi is often mixed with patis (fish sauce) or soy sauce for that indescribable sour-salty taste.

Don’t throw away those kalamansi peels. They effectively wash away the lingering smell of seafood after picking on them with the hands. Or dip them into dishwashing solutions to produce a lemony fragrance. Enterprising Filipinos have come up with bottled pure kalamansi extract flavored with honey. It is a welcome idea as it spares us the task of having to squeeze each tiny fruit of its juice. Mixed with ice cold water it makes a refreshing drink. One restaurant even came up with a dessert called calamansi tart, in which this native fruit takes the place of lemon as the main flavoring.

The macapuno is a mutant of the coconut. Until I had to write this piece, I thought that the macapuno fruit is just an abnormal outgrowth of the regular coconut tree as I had learned as a child. Not anymore, the Philippine Coconut Authority corrected me. The Authority has developed macapuno trees that yield 80 per cent macapuno fruits. The trees grow in abundance in Albay where the Authority’s research center is.

The macapuno fruit looks like the regular niyog except that it is bigger. Farmers have a way of knocking on the nut to determine if they have macapuno or niyog. The macapuno meat is as thick as the niyog but softer, making it easy to grate. Macapuno is cooked with sugar, sometimes with dayap for flavor, and served as a dessert. Local ice cream makers also have macapuno flavors.

This fruit often regarded as one of the four most delicious fruits in the world along with the mango, pineapple, and cherimoya. Let me add that the mangosteen is also such an elegantly designed fruit. If it were a movie personality, the mangosteen would be Audrey Hepburn. Outside, it is a perfect round of deep purple with a petite green crown. Gently break through the skin and you understand why it is quite thick – encased within the deep pink shell is the delicate white meat of the mangosteen. Take time to admire the colors before you yank out the segments. You don’t chew on the meat, by the way. You simply let it slide with your tongue and suck on the juice, taking care not to bite the seed. You will most likely encounter sour pieces but the sourness is tempered and not unpleasant.

What a waste these makopas are when the trees are in bloom. The pink and bright red bells are so attractive and the trees produce so much fruit but, alas, there are so few takers. The best way to eat makopas is chilled, with a sprinkling of salt. Watch out for worms, though, as you reach the core. Or, make them into salads as some creative housewives have.

Bet you never knew how it looks, much less how it tastes. Marang smells like durian (though subdued), looks like langka, and feels like atis. Outside, it looks like a rounded brush (the one we call scuba), brown and soft, even bristles. They are ripe when they start to smell, so don’t think you’re getting a rotten one if the bristles start to get ugly.

I brought one to the office and everyone was inquiring where the smell was coming from. It was the first time we were going to taste the fruit. General assessment: very sweet. I look forward to eating it again

Yes, these are legitimate fruits, not undeveloped mangoes. I had thought these were known to Batanguenos alone but these are familiar in many regions. But I am told of a gentleman farmer in Tarlac who, upon seeing the paho fruits, thought that he had a diseased mango tree and promptly cut it down.

The paho has a bearable sourness that lingers in the tastebuds long after the meal. In Batangas, paho is eaten raw. Mixed with chopped tomatoes and onions flavored with soy sauce, it is the perfect accompaniment to fish, be it tawilis, tulingan or maliputo. I associate paho with an aunt who had the knack of mixing paho, tomato, and soy sauce into just the right blend that I always asked for a spoonful of the concoction deftly mixed with rice and fish. In some households, paho is pickled brine. But doiong so takes away the pungency that makes the fruit so special.

This one versatile tropical fruit. When ripe, it is eaten fresh or mixed with milk and sugar to make a papaya shake. When still raw, it is cooked with chicken to make into tinola, or shredded and flavored with vinegar and spices to make into achara.

There are several varities of papaya. The solo is the mini papaya, so-called because it is meant to be eaten by just one person. Its orange-colored flesh is firm and sweet. The distinctive mark of the morado is that its flesh is pinkish. Unlike regular papaya, the morado flesh is not very sweet but it is light and refreshing.

Many people always associated sineguelas with the spookiness of its tree before it bore fruit. The sineguelas tree sheds off all its leaves before it flowers, and the fruits appear just in time for the summer. Wait for the fruits to turn red because that’s when they’re sweet and juicy. Nutritionists tell us that the sineguelas is loaded with Vitamin C.

This heart-shaped, orang-yellow summer fruit is said to be one of the best sources of vitamin A. Eating tiessa is like eating boiled kamote (sweet potatoes), given its fibrous, sticky texture and thick flesh. But it has a cloying sweetness that makes one fruit too much for just one person to finish.

This fruit is being sold in a vegetable cart with squash and string beans. They looked like underdeveloped langka or jackfruit, little round langka with the same green spiny cover. This fruit is never allowed to mature and ripen. It is cooked in its infantile stage into a vegetable dish, with coconut milk.