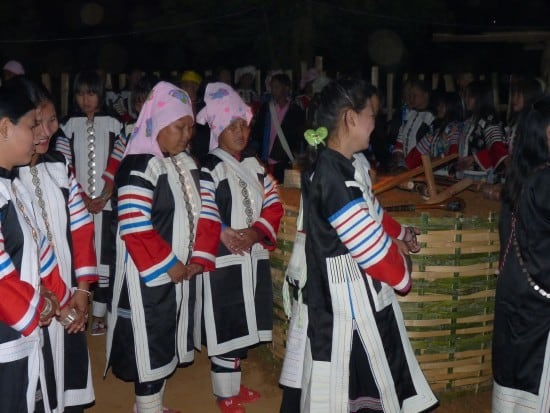 Scattered through the mountains and valleys of northern Thailand are ethnic minorities that include;

Akha are the largest of the hill tribe groups, and originated in Tibet and Southern China, before they migrated to Burma, Laos and Thailand. Perhaps the most impoverished of the hill tribes, they’ve in the main staunchly resisted incorporation into Thai culture and religious interference.

Lahu are from the Yunnese region of southern China and prefer to live at higher altitudes, in villages situated above 1,000 metres. They are renowned both as hunters and planters.

Lahu usually remain near the Thai / Myanmar border. The 5 sub-groups include: Red Lahu, Yellow Lahu, Black Lahu, White Lahu and Lahu Sheleh. The Black Lahu (above) are the largest sub-group, making up an estimated 80 per cent of the Lahu population in Thailand. The Lahu women wear very distinctive black and red jackets and skirts, whilst the men usually wear baggy green or blue pants. More reading…

The Hmong are a fiercely independent tribe of Sino-Tibetan origin, mostly from southern China. They like to occupy rolling or flat hills and plateaus. They raise livestock and grow rice, corn, tobacco and cabbages and are also known for their embroidery and silverwares.

In common with other nomadic tribes, the Hmong display much of their wealth in silver jewelry and ornamentation. Sub-groups such as the Green Hmong and White Hmong speak distinctly separate dialects and wear different traditional dress. The Green Hmong are the more numerous, and women wear heavily embroidered, very tightly pleated skirts (as per photo above). The men wear baggy black pants with bright embroidery on cuffs and seams. More reading…

Lisaw (Lisu) from southern China and Tibet are renowned for their colorful dress and also build their dwellings on high poles. They harvest rice and corn and their men are skilled in hunting.

Lisu like to build their villages near the tops of mountains, as close as possible to streams or waterfalls. Houses have only one door and are constructed parallel to the face of the mountain. Each village has a “spirit house” and like other tribes, each house has a small shrine to the spirits of their ancestors. More reading…

Some 33,000 Mien are located in Thailand, remaining closely connected to their Chinese heritage. Their language, long ago derived from Han Chinese, is written in Chinese characters. Their paintings are usually of a religious nature. Artworks incorporate ancient Chinese artistic styles, albeit with a distinctive Yao style, and are sought after by Western collectors.

In areas along the western border with Myanmar, there are many Tai Yai (Shan) and Karen from Myanmar’s Shan State.

Along the Mekong (eastern border) there are many Tai Lue people. The Tai Lue (Dai Lue) inhabited both sides of the Mekong River in the Sipsongpanna region of Yunnan, southern China.

Also historically significant are the Chin Hor – the decendents of the Yunnanese traders who plied their wares and trading skills from Yunnan in southern China, throughout Burma (Myanmar) and Siam (Thailand).

Other Chinese migrants who came to establish businesses are augmented by surviving members of the the Kuomintang (KMT) Nationalist Chinese “lost” 93rd Regiment who settled in Doi Mae Salong and Fang areas in the 1960’s.

Tai Yai (Shan) in Thailand have crossed the border from Myanmar (Burma). They harvest rice, farm, raise cattle for trade. Their craftsmanship skills are in wood carving and bronzeware, distinctive woven products and pottery. The Shan ordination ceremony of Poi Sang Long, held in Mae Hong Son each March or April, is a popular attraction within that region – but also in Chiang Rai province on a smaller scale.

Shan architecture is distinctive in style, significantly different to the Lanna architecture across northern Thailand.

During the latter half of the 19th century Shan people migrated throughout northern Thailand, working mainly in the lumber trade and as skilled mahouts, or elephant masters. During this period Shan communities were established in Chiang Rai and Lampang provinces, as well as in Phrae, where some amongst their number participated in the “Shan Rebellion” of 1902 the last act of overt rebellion against Bangkok to have taken place in northern Thailand.

Most Shan are staunch Theravada Buddhists, and the Shan constitutes one of the four main Buddhist ethnic groups in Burma; the others are the Bamar, the Mon and the Rakhine.

Most Shan speak the Shan language and are bilingual in Burmese. The Shan language, spoken by about 5 or 6 million, is closely related to Thai and Lao, and is part of the family of Tai languages.

The Tai/Shan people are believed to have migrated from Yunnan in China. The Shan are descendants of the oldest branch of the Tai-Shan, known as Tai Long (Great Tai) or Tai Yai (Big Thai). The Tai-Shan who migrated to the south and now inhabit modern-day Laos and Thailand are also known as Tai Noi (or Tai Nyai). The Shan have inhabited the Shan Plateau and other parts of modern-day Myanmar as far back as the 10th century AD.

The Karen people are from Myanmar (Burma) and prefer to inhabit mountain valleys and riverbanks. They have a tradition of environmental care, and traditional agricultural practices. Karen women are skilled in sewing, dyeing and weaving. Their dress includes combination of tassels and embroidery, and long hair is usually tied back in a bun and covered with a scarf. The Karen men wear woven v-neck tunics of various natural colours and turbans, whilst unmarried women wear white.

Karen usually settle in the foothills, living in raised wooden houses, beneath which live their domestic animals: pigs, chickens, and buffaloes.

Skilled farmers, they practice crop rotation, and they also hunt for wild game. The Karen are renowned as elephant handlers, often using them to help clear farmland. More reading…

The Tai Lue have one of the oldest recorded histories. The first Lue Kingdom was formed in Yunnan in 1180. The original areas controlled by the Tai Lue included both sides of the Mekong River in the Sipsongpanna region of Yunna, southern China. There are approx 300,000 Tai Lue people living in Thailand’s northern provinces of Chiang Rai, Phayao, Nan, Chiang Mai and Lamphun. Many of the “Tai Yong” who migrated to Thailand from Muang Yong in Myanmar were originally Tai Lue.

The Haw are descendants of the early Yunnanese traders who plied the Golden Triangle region, circulating between Yunnan, Burma and Thailand. Their customs and traditions are a mix of Yunnanese and Muslim, and dishes such as “Khao Soi” are attibutable to their influence on the culinary landscape. The Haw are unlike the other communities in North Thailand who are predominently Buddhist (or animist) and of Austro-Asiatic and or Tai descent.

There is a significant distinction between the Chin Hor and;

The creation of the Lanna Kingdom and its history is a part of the unfolding story of the Tai Yuan following their migration from China to the Upper North of Thailand.

The Khon Muang became known as “People of the Principalities” and were the urban dwellers of towns and cities such as Chiang Mai, Lamphun, Lampang and Phrae. They eventually dominated Thailand from the provinces of Sukhothai, Tak and Uttaradit northwards. A cultural distinction existed between northern and southern Khon Muang;

In Chiang Rai province, the most revered historical figure from the Lanna Kingdom is Por Khun Mengrai, the father of the “Land of a Million Ricefields.”

Most of the hill tribes that migrated into Thailand lived inconspicuously in the remote upland areas and practiced subsistence farming. For decades, they were prety much ignored by Thai authorities. By the 1950s, steady growth in overall numbers and ethnic groups, extreme poverty, statelessness, opium cultivation and insurgency problems encouraged the government to create the National Committee for the Hill Tribes.

For decades, opium cultivation was the primary income for many of the hill tribes. The Thai government, supported by a plethora of Royal Projects initiated by his Highness King Rama IX, battled hard to both eliminate opium fields and provide alternative income sources. Success came through a combination of;

Today, the hill tribes are a colourful addition to the northern population, and their overall conditions are improved, but far from perfect.

These elements have brought about significant cultural changes, and old ways and traditions are endangered. There is a price to pay for financial assistence, it seems…

Balanced against that, Thailand has provided a relatively safe haven for these diverse, stateless nomadic hill tribes, and for those endangered by violence and oppression in the neigbouring Shan State of Myanmar. The Thai government’s efforts to integrate ethnic minorities into mainstream society is admirable in the sense that schools and medical services are supplied and funded even in very remote areas.

For that, successive Thai governments deserve some applause! Their relative hospitality is in stark contrast to many other countries in the Asia-Pacific region!