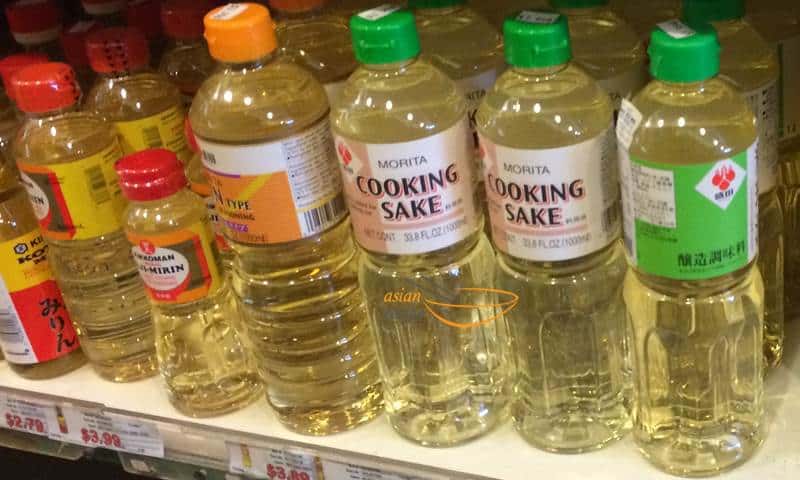 Cooking sake, soy sauce and mirin and make up the trifecta of pantry staples in Japanese cuisine.

Sake is made like beer, but with rice. You can cook with drinking sake if you want to, but most Japanese people use cooking sake. However, it is somewhat hard to find (also pretty expensive). Look in the cooking wine section of a Japanese or Korean grocery store and you might find it. If you make a lot of Japanese food, get the 1-liter bottle made by Mizkan. There are also smaller bottles.

Sake is usually used in meat or seafood dishes to get rid of bad tastes because of the alcohol. If you do not drink alcohol, all of the alcohol evaporates so it is okay. If you are Muslim or another religion that prohibits cooking with alcohol, you can skip it when used in smaller amounts (under a tablespoon), but use water instead when used in larger amounts.

The earliest reference to the use of alcohol in Japan is recorded in the Book of Wei in the Records of the Three Kingdoms. This 3rd-century Chinese text speaks of the Japanese drinking and dancing. Alcoholic beverages are mentioned several times in the Kojiki, Japan’s first written history, written in 712.

Like other brewed beverages, sake tends to benefit from storage for 9 to 12  months to mature. Maturation processes are affected by physical and chemical factors such as oxygen supply, the broad application of external heat, nitrogen oxides, aldehydes and amino acids etc.

Toji is the job title of the sake brewer, named after Du Kang. It is a highly respected job in the Japanese society, with toji being regarded like musicians or painters. The title of toji was historically passed on from father to son; today new toji are either veteran brewery workers or are trained at universities. While modern breweries with refrigeration and cooling tanks operate year-round, most old-fashioned sake breweries are seasonal, operating only in the cool winter months. Outside that period, most toji will work elsewhere, often on farms. They will usually return to the brewery from time to time to supervise storage conditions or bottling operations.