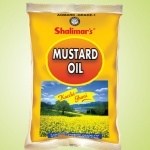 This oil has a strong smell, a little like strong cabbage, a hot nutty taste, and is much used for cooking in Bengal, Bihar and other areas of India and Bangladesh. The oil makes up about 30% of the mustard seeds. It can be produced from black mustard (Brassica negra), brown Indian mustard (Brassica juncea), and white mustard (Brassica hirta). 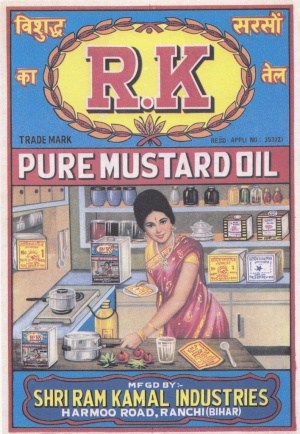 Mustard oil is composed mostly of the fatty acids oleic acid, linoleic acid and erucic acid. At 5%, mustard seed oil has the lowest saturated fat content of the edible oils.

In Northern India, mustard oil is also used for rub-downs and massages (see ayurveda). To get around the restriction in Western countries, the oil is often sold “for external use only” in stores catering to Indian immigrants.

In India the restrictions on mustard oil are viewed as an attempt by foreign multi-national corporations to replace mustard oil with canola oil (a variety of rapeseed with a low erucic acid content). But for North Indians mustard oil is not just a cooking medium but it is very much intricately interwoven with their culture. They have been using it for ages and dispute that there is enough evidence for the toxicity of erucic acid.

Mustard oil may say on the label “for external use only.” On looking up mustard oil on the web I am told that it is extremely toxic unless heated to smoking point first. In one of the very well known Indian writer’s cookery books, she recommends mustard oil to be used in a salad dressing.

Here is an interesting web site about the medieval mustard, including lots of recipes for mustard oil..
http://www.greydrago…ry/mustard.html