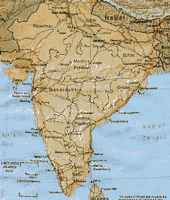 What’s for dinner tonight? Cumin, coriander and cardamom; mustard, mango powder, ginger; asafetida, fenugreek and chilies. And then there’s turmeric, tamarind and saffron, curry leaf, coconut milk and kewara water, almonds, cashews and pistachios — and those are just the seasonings!

Only one place on the map incorporates this riot of sensory stimulation in its meals: India. In fact, the intensive use of spices — whole, ground, roasted and stewed — marks the unifying characteristic of an otherwise highly diverse cuisine. Characterizing Indian food is a bit like describing European cuisine — all of it at once.

Indian food presents a range of flavors, intense and subtle, as vast as the country itself. Regional influences range from climate and elevation to history and religion. They define cuisines that differ widely — no surprise in a country of 884 million people occupying an area of 1,226,595 square miles.

In addition to the pronounced use of spices, common culinary threads unifying local cuisines include the prominence of flatbreads and a far greater use of dairy products than anywhere else in Asia. Breads are made with wheat, rice and ground legumes depending on the part of the country while dairy products include milk, cream, yogurt, buttermilk, sour cream and cheese.

Beyond that, the differences take over. Northern Indians tend to use their spices ground while Southerners start out with them whole and grind them to a paste with cooked onions and other ingredients. The South is the land of rice while Northerners rely on wheat and other grains — except for Kashmir, high in the Himalayas, which produces some of the best rice in the world. Cooks of the tropical South make heavy use of coconut milk, an ingredient rarely seen in the North. Areas with access to waterways rely more heavily on seafood. Thus Bengal is a region of fish-lovers, preferably the fresh water variety.

Those parts of India with the longest history of Mughal rule exhibit strong Persian influences in their food, using fresh and dried fruit, cashews, pistachios and almonds in their meat dishes as well as a great many dairy products. The cuisine of royalty, Mughlai dishes may use as many as 12 spices in a single dish including the most expensive of them — saffron, cardamom, cinnamon and cloves. Meanwhile, the food of Goa on the Southwestern coast betrays that province’s long history as a Portuguese colony. Goanese eat pork and duck, meats rarely seen outside the area, and use vinegar as a souring agent, a Portuguese legacy.

Undoubtedly the strongest influence defining Indian food is religion. Centuries of Hindu practice and the profound belief in reincarnation have resulted in the most delicious vegetarian cuisine to be found in the world. For protein, vegetarians rely on a wide range of legumes, both whole and split. Mixed with grain, boosted by vegetables and dairy products, and spiced to the max, they provide a wholesome, varied diet.

But nothing is simple in India. Brahmins and members of the merchant caste may observe strict vegetarian rules, but members of other castes eat meat. Styles of vegetarian cooking differ from region to region. Non-Hindu minorities produce their own cuisines and have had a major impact on how others eat. And then there’s Kashmir where Brahmins eat meat — but avoid garlic and onions.

Hinduism, however, determines what kinds of meat people eat. Beef is strictly forbidden because Hindus realized from ancient times the life-giving role cows played in society — from producing dairy products to pulling plows to providing fertilizer for the fields. Today it is illegal to slaughter a cow anywhere in the country except in heavily Christianized Goa. The meats of choice are therefore goat, mutton and chicken.

The Muslim minority in India — currently 11 percent — has impacted cuisine and eating practices nationwide. Ancient Vedic concerns with purity made for an austere lifestyle when it came to food. Socializing over a meal was almost impossible if one had to worry about contamination from a host’s kitchen or the caste of his cook.

Muslims, who conquered a large portion of India in the 12th century, had minimal religious restrictions — principally prohibitions against alcohol and pork. What’s more, Islam encouraged zakat, or the sharing of food with others. Hospitality played a critical role in Mughal courtly society and, as Persians, the Muslim rulers brought with them a marvelous cuisine to share.

Mughal influence is most strongly felt today in the culinary centers of Delhi and Lucknow in the North and Hyderabad in the South. But while the kebabs, pilafs, kormas and yogurt dishes may spring from similar roots, interpretations reflect local cooking styles. The foods of Delhi and Lucknow remain slightly closer to the Persian models — with the addition of cumin, coriander, turmeric, cardamom, cinnamon and ground chilies typical of the North. Meanwhile mustard seeds, curry leaves, hot chilies, tamarind and coconut milk infuse the dishes of Hyderabad.

Indian restaurant food barely skims the surface of Indian cuisine. Hindu Punjabis forced back across the border from Pakistan at the time of the partition started the first restaurants in 1945. Their beehive-shaped tandoori ovens which heat up to 1000 degrees cook meat, fish and bread lightning-fast and remain their greatest claim to glory. A mix of Punjabi and Mughal cuisine has become standard restaurant fare both in India and abroad.

Sampling the breadth of Indian cuisine thus remains a challenge inside the country and out. Serious research is necessary to
locate those few restaurants dedicated to serving pan-Indian cuisine.

The alternative, of course, is to cook it yourself. Many good cookbooks can help you along and the techniques are not that
difficult. Grind your spices in a coffee grinder and puree seasoning pastes in a blender or food processor.

Meanwhile, what is this stuff called “curry” we’ve been eating all these years? Not Indian, I’m afraid.

Colonial rulers have never been known for their linguistic accuracy and no one knows for sure where the British got this one. “Kari” is a South Indian word for sauce and “tarkari” is a North Indian dish — which may or may not be relevant. Clearly the sahibs and memsahibs fell in love with the flavors of India. When they returned to the homeland, they had their cooks grind up a mix of spices to sprinkle on their staid British staples. The world now knows this as “curry powder” and whatever is cooked with it is “curry.”

As if the same stodgy old combination in dish after dish could begin to reflect the wonders of India!