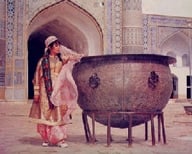 Tibet enters history with the introduction of Buddhism and the organization of a kingdom in competition with T’ang China. Eventually, the Tibetans ended the Chinese presence in Central Asia and even briefly occupied the T’ang capital, Ch’ang-An. The Tibetan language is related to Chinese, but culturally Tibet is a sub-Indian rather than a sub-Chinese civilization.

The last King of the period is supposed to have turned against Buddhism, and the kingdom fragmented after him. Rulers of various successor kingdoms are apparently available, but not presently know to me.

A special title was produced for the regents, Tisri, or Ti-shih in Chinese. The rule of the Tisris continued until Mongol authority itself decayed and native opposition arose. When the Mongol YuanDynasty was overthrown in China, Tibet as well passed into independence, although maintaining more cordial relations with Mongolia than the Chinese would.

The second unified Tibetan Kingdom followed the liberation from the Mongols. This was not an aggressive, conquering kingdom like the first one. Indeed, it fell prey eventually to the still aggressive Mongols, even after converting them to the Tibetan form of Buddhism. This Mongol conquest, however, resulted in little more than a local Mongol dynasty, with much actual authority aleady ceded to the (Fifth) Dalai Lama.

The pretext of the Manchu conquest was over the ovethrow of the local Mongol dynasty by other Mongols, who installed their own candidate for Dalai Lama. The Manchus thus arrived with the legitimate and popular (Seventh) Dalai Lama, thus posing as liberators rather than as conquerors. After experimenting with a couple of new native Kings, Manchurian rule settled down to the use of the Dalai Lamas for local control.

The line of Lamas that came to rule Tibet began like many other monastic lineages in the country. The path to political power began with a mission to Mongolia that converted Altan Khan, who bestowed the titleDalai, “Ocean,” on the Third Lama, retroactively applied to the earlier figures in the lineage. When Mongol rule was imposed in 1642, the Fifth Dalai Lama was held in such esteem that the effective rule of the country was often left to him. From this the tradition began that led to complete de jure rule later on. It was after the Manchus arrived (1720) that a local kingship was entirely abolished (1750) and there was no rival except the equally monastic Panchen Lama, who often has been used by the Chinese in an attempt to divide Tibetan loyalties. This continues to the present. After the death of the pro-Chinese Panchen Lama in 1989, Tibetan exiles and the Chinese designated different successors. The Tibetan nominee was arrested by the Chinese government and is presently unaccounted for, while the Chinese nominee, Gyancain Norbu, exercises the office.

The world knew little of Tibet in the 19th century. The occasional outsider made his way there. Other possibilities did not occur until the fall of the Manchu Ch’ing Dynasty. A Chinese garrison had actually been introduced into Tibet in 1910 as a reponse, eventually, to a British mission to Tibet in 1904. The Dalai Lama had even gone into exile in India. But, with the fall of the Dynasty, the Chinese were attacked. They ended up evacuating Tibet, disarmed and through India, with British mediation. The Dalai Lama returned. China was then too distracted for a while to effectively assert its authority over Tibet and other districts, like Mongolia, that drifted out of Chinese influence. An invasion of Mongolia in 1919 to assert claims there only resulted in a Soviet sponsored counterattack that permanently detached the country from China. An expedition to Tibet was probably beyond the logistical capabilities of the struggling Chinese Republic.

Some years of real independence again, and diplomatic relations with the British, followed. The British did not recognize the complete independence of Tibet, but they denied that Tibet was an intrinsic part of China or that China had the right to subjugate Tibetan autonomy by force. China never gave up its claims, but there was altogether too much going on elsewhere for the Chinese to worry about the inoffensive Tibetans. But after the Communists came to power, China was again unified, with a large, seasoned army, and an aggressive, unapologetic leader, Mao Tse-tung.Unafraid to take on the United States and the United Nations in Korea, Mao would have little to fear by occupying Tibet. The British were gone from India, and nobody else had any particular reason or opportunity to protect Tibetan independence. In 1950, against token resistance, the Chinese rolled in, the first time that an actual Chinese government had done so, rather than one of the foreign rulers, Mongol or Manchu, of China.

Although the Tibetans were promised internal autonomy by the Chinese, they soon were subjected to the inevitable oppression, vandalism, and massacres of Communist government. Since there never were very many Tibetans in their poor, Alpine country, this kind of treatment plus Chinese colonization began to produce a genocidal effect. The International Community, once energized about “de-colonization,” and formerly alert to every police beating in South Africa, has shown little stomach for consistently confronting the Chinese over Tibet. On the other hand, the Fourteenth Dalai Lama, who fled into exile in 1959, has proven to be an appealing, eloquent, and respected spokesman for his country, attracting attention by many, including the Nobel Peace Prize committee and Hollywood devotees who now have produced sympathetic movies about Tibet and its plight (e.g. Seven Years in Tibet and Kundun). We can only hope that international pressure will increase and rescue a unique nation preserving an ancient heritage.

Although Western, usually American, defenders of Tibet are sometimes belabored with charges of hypocrisy, because of the treatment of the Indian tribes in American history, so that Americans are in no moral position to belabor the Chinese over the treatment of Tibet, it remains true that nowhere in the world have traditional tribal peoples, who were at neolithic or even paleolithic levels of development at their time of contact with the advanced civilizations (Eastern or Western), not been incorporated into larger modern states. There are often complaints about the status and treatment of tribal peoples in many places, from the United States to Brazil to the Sudan, but there is no special level of criticism about such peoples, of which there are many, in China.

Tibet, however, was, for all its poverty and isolation, an organized state far beyond the tribal level. Like Ethiopia or Afghanistan, Tibet was the sort of state that, in the era of “decolonization,” would be expected to become independent, regardless of its backward features. But the Chinese Empire and Chinese colonization survive, with no more justification than the precedents of the Mongol and Manchurian Empires.

Government of Tibet in Exile