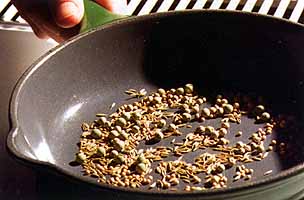 One of the simplest ways to boost flavor and improve your cooking is to toss out stale jars of dried ground spices and to buy whole spices to grind yourself. Heating a spice, whether toasting it dry or frying it in a bit of oil, further enhances its flavor, giving the spice a fuller character.

Grind whole spices for freshness and flavor. Whole spices have four times the shelf life of ground spices because their seed coatings and barks protect their flavors, which aren’t released until they are ground or heated. A coffee grinder devoted to spices makes grinding a snap, though you can also grind spices, especially small quantities, in a mortar and pestle.

Try toasting spices for an even deeper flavor. Whole spices work best for toasting because ground spices can burn easily. Some people like to roast their spices in the oven, but I like the control I get by toasting them on the stove where I can see them. Because spices burn easily, it’s important to use a heavy-based pan over gentle heat. Shake the pan or stir the spices with a wooden spoon as they heat. They’re ready when they become highly aromatic and turn slightly darker, which usually takes just a couple of minutes, but can take as long as five minutes, depending on the spice, the heat, and the pan.

Once toasted, immediately pour the spices out of the pan to stop them from cooking further. Let the toasted spices cool, and then grind them. They can be stored tightly covered for a few weeks without losing much of their flavor.

You can toast more than one kind of spice at a time. Begin with those that will take longest and add any ground spices at the very end, just before taking the pan off the heat.

Hot oil also brings out a spice’s flavor. Cooking spices in oil is a method most of us use all the time without recognizing it as anything special. Every time you heat oil in a pan and add some chopped garlic, you’re effectively doing the same thing. The flavor of the garlic is intensified and the oil becomes infused with the garlic’s flavor to permeate the finished dish.

It’s messy to try to grind spices after they’ve been cooked in oil, so use the spices in the form you want them to end up in. I often toss ground spices in warm oil for a moment before adding other ingredients. Ground spices are ready in fewer than 10 seconds; whole spices take about 30 seconds. Some seeds, such as mustard seeds, pop ferociously when they hit the hot oil, so stand back.

–Molly Stevens, a contributing editor for Fine Cooking, is a chef/instructor at the New England Culinary Institute in Essex, Vermont. From FC #14, “Basics