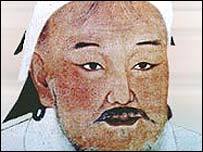 At the opening ceremony for the annual Nadaam festival in the Mongolian capital Ulan Bator, the star of the show comes not from today but from 700 years ago. Bursting on stage in the middle of the national stadium is the unmistakable figure of Genghis Khan, the Mongol warrior who built a vast 13th Century empire.

In flowing, fur robes the great Khan seats himself on a giant golden throne. The crowd roars. On the field his minions bow before him. These rather over-the-top theatrics are part of a growing cult built around the image of Genghis Khan

Under Mongolia’s former Communist rulers, the mere mention of his name was outlawed. Now there is no escaping him.

An hour from the capital, the annual Nadaam horse races see hundreds of racers gallop across the open steppe kicking up huge clouds of dust. The racers are all children, but the competition is still fierce. Ask any of them who they most admire and the answer comes firing back:

“Genghis Khan, he was a great Mongolian!” says 13-year-old Batsukh.

In Ulan Bator there is now a Chinggis Khan Brewery [Chinggis is a closer transliteration of the Mongolian than Genghis], and even a Chinggis Khan night club, packed with young Mongolians knocking back Martinis and glasses of cold beer.

The Great Khan is not only ubiquitous, he’s cool. But why are Mongolians so hung up on the blood-thirsty absolute monarch who died more than 700 years ago?

Sumati, one of Mongolia’s most acerbic social critics, suggested one answer: “Mongols at that time were much more powerful as a nation comparing to what they are now. There are 2.5 million Mongols struggling here in a country with a poor economy, poor infrastructure, with strong neighbours.

“But really there is little knowledge about that time, just more emotional than based on some facts, when people relate to the name of Genghis Khan”.

Young Mongolians may have little idea who their hero really was. But in a country that suffered so much under communism, and which now faces a deeply uncertain future, Genghis Khan is the one figure they have to cling on to – a symbol of a time when these horsemen of the steppe ruled half the known world.