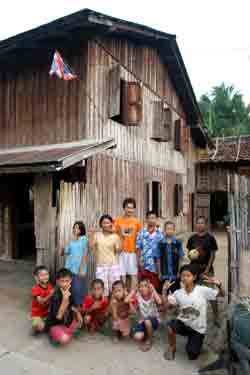 “It was fifteen years ago today,” recalls Tasanee Keereepraneed, 48, Director of Safe Haven Orphanage that cares for orphans at Tha Song Yang, a remote village in Tak province, “when a relative of a dead mother walked five hours to inform me of a newborn girl whose life was under threat.”

“If I didn’t take the child in time,” explained Tasanee, a tireless defender of the Karen people, “the headman of the village was going to kill the baby, as they believe that if the mother dies giving birth, then the baby is a pariah, and will cast bad luck over the village.”

Bhujay, which in Karen means ‘lucky girl’, is a healthy 15-year-old who, today, has interest in clothes and is a fan of David Beckham. She often tells Tasanee how indebted she is to her for saving her. This is how the Safe Haven Orphanage was born. Now there are over twenty children staying in this old wooden house, ranging from six years to twenty. Tasanee’s mother runs the day to day operations with the help of a nanny. While Tasanee manages an internet shop in Mae Sot, a good three hours’ drive from the village, to make ends meet.

If anyone understands the devastating effect of losing loved ones, Tasanee does. In 1980, she met her husband, Chai Yand who was headman of this village. They were soon married. Tasanee worked as a job developer in Mae La Moo Kee village, helping Karen refugees in nearby areas, she described this period in her life as the most happy and stable. When her husband was murdered, because people envied his position as village headman, Tasanee was left alone.

As bad as this was for Tasanee, the hardest hit were her three children. “My love was not enough; they were young and really couldn’t grasp the concept of death. We settled back as a family into village life, but things would never be the same again,” she mused. “I began to contemplate the need for a loving family in the development of a human being, was I a different person for not having a husband? Would my children be different as a result?”

Ben Johnson, a social worker from New York, has joined Tasanee in trying to create a recognised non-profit status for Safe Haven Orphanage. But it hasn’t been easy, says Ben, who is based in Mae Sot. “Tasanee relies on the good wishes of her friends in Mae Sot for fund-raising, but because the children are not refugees, funding has been a real battle.”

Ben admits that many Karen children in this village want to be soldiers. “The fight for Karen independence from Burma has been going on for 50 years,” explains Ben.” So I can understand why many of these children would want to be soldiers. But here we try to convince the kids, if you really want to help the community, then you must continue your education. Being a soldier isn’t an option.”

Naw Phon, now aged fifteen, lost his father at the age of four, when he stepped on a landmine while fishing at the Moei River. His mother committed suicide a few months later, not being able to stand the burden of raising a four year old son and a three year old daughter. “He was an angry boy,” says Tasanee who took them both in ten years ago. “He wanted revenge and dreamed of being a soldier. We tell all our children here that the pen is mightier than the sword. And that education is the way to success, not taking up arms.”

And Tasanee is talking from experience. As a nine year old in Tha Song Yang, she lost her father who was a captain in the KNLA (Karen National Liberation Army), fighting for an independent Karen state in Burma. He was lost in action on the front line against the Burmese army and with nobody to confirm his death, Tasanee held out for many years with childish naivet? the hope that he would return.

Her essential mission has not been a solo one. Kham Heang Seriwong, director of the school in Tha Song Yang village, was appointed in 1985. When he arrived, there was no electricity and the teacher turnover was high. “We just couldn’t get teachers to stay. Being in a remote village was one thing, but at the time there was also a lot of hostility from Burma.”

In collaboration with Tasanee, who is very well respected in the Karen community – she speaks two Karen dialects, Burmese, Thai and English – they opened up two schools in the remote mountainous regions in Htee Shaw Man and Mae Kyang, which take a couple of hours to reach by four wheel drive. “I wanted to give the children a chance to be educated,” says the director, who is responsible for over 800 students at Tha Song Yang School. “At the recommendation of a few village elders in these remote villages, we decided to set up two schools that go up to grade three,” he added.

After pratom three (age 9), however, the children in these remote villages are left with few options. Most families are too poor to afford an automobile and the Tha Song Yang School is just too far away and inaccessible. This leaves many in the community with nothing better than a third grade education. Kham Heang is now searching for ways to set up a dormitory so that the children in the outlying villages can attend the Tha Song Yang School during the week.

Outside the orphanage, the limestone peaks across the border are shrouded in clouds. Tasanee tells me that the Burmese have launched attacks on the village, spraying bullets and mortars. She shows me evidence of this. “See this wall,” she says, pointing at the pock-marks on the wooden house. “They are bullet holes.”

As a child, attending the same school as her children do now, Tasanee remembers well the potential dangers of being near rebel

territory that the Rangoon based junta are intent on squashing. “The teacher would give us drill practice. And when the siren wailed in the night, we knew to go into hiding in a safe place.”

And this threat is still very real today. In 1998, the Democratic Karen Buddhist Army, a splinter group of the KNLA, and a known ally of the Rangoon junta, sneaked over the border and burnt down the Huay Kalok refugee camp, leaving 8,000 Karen refugees homeless. “I used to teach there,” says Tasanee, who is a tireless defender of the underdog.

Good Wish Orphanage is a basic shelter and home where the children are showered with love thanks to Tasanee’s mother, grandmother and the nannies who are always on call for the children, says Ben: “Right now we are looking for economic stability. We mainly get donations from the community in Mae Sot. That’s my job out here, to make this place internationally recognised. Especially in this case, these kids are really in a position to help a sadly marginalised community in Thailand.”

Education cannot be emphasised enough here at Good Wish House. Two of Tasanee’s children, both teenagers, now live with her in Mae Sot, where they are finishing off their high school. Naw Phon wants to be a computer programmer. “He’s always playing violent computer games,” says Tasanee, who adds that he’s no different from other Thai students. But she wants him to channel his energy. “He’s always pulling computers apart and putting them together again in the shop, soon we’ll enroll him into a computer course.”

And Ben couldn’t agree more passionately, wishing that Tasanee’s children will have a real chance to make a positive impact on their community and their culture: “We can educate them to be teachers, lawyers, doctors or politicians so that they might make a difference without having to give up their dreams and become soldiers in Burma.”

Tasanee’s ultimate goal for her children is education, thus strengthening her community one child at a time.

If you would like to visit or help, please contact the Director Tasaneee Keereepraneed, [email protected] or mobile: 66-07-206-0360.

I have personally visited with Khun Tasanee, and have visited their home. She is a great Lady with a most difficult task, which she does completely on her own. Please offer her your support, if you can…

text by Tom Brecelic
photographs by Julian Bound
From chiangmainews.com