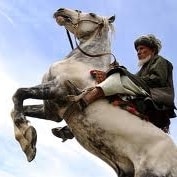 Don’t Be Taken In By The Rat Race

A minister once fell from grace. He left court and joined a group of dervishes. By virtue of their company, he achieved peace of mind and a reformed character.

The ruler soon changed his mind and decided to reinstate the disgraced minister. The man refused and said: “I prefer to live in retirement than to busy myself with politics. Whoever opts for a quiet life is free to forget the snarling calamities of rivals. I may no longer have the minister’s special pencase, I may have torn up all my papers, but at least I no longer have to put up with bad mouthing from my critics.”

The ruler replied: “I always need a competent and wise man to help run the state.”

“The sign of wisdom in a man, ” the ex-minister replied, “is precisely not to be taken in by the false attractions of politics. Why is the Huma superior to other birds? Because it is content to live off dry bones and thus never oppresses any living thing. Have you heard the story of the lynx? It was asked why it chose to serve in the court of the lion and replied that at court it could live safely protected from its enemies and well-fed with the left-overs of the king’s meals. The lynx was also asked why it did not, like other courtiers, manuvere to get itself into the innermost circle of the lion’s most trusted companions. Whereupon it said: ‘I can not be safe from the king’s anger if I am too close to him.’ The Zoroastrian can spend his whole life tending the fire he worships; the fire will burn him up none the less, if ever he falls into it! Your Majesty’s companions never know whether they will make a fortune or lose their heads! It is well known that one should be aware of the ruler’s fickle moods; he takes offense at a polite greeting one moment and the next he showers rewards on someone who has just insulted him. To be a courtier, you have to be as slippery as an eel; to be a wise man, you have to aim higher. Let politicians flatter and lie and cheat their way to the top! I know my own human worth: that dignity is enough for me.”

Even Friendship Has Its Limits

There was once a man who was a champion wrestler. He had mastered 360 holds and tricks, and used a different one every day of the year. It so happened that he was fond of one of his students, and taught him all his tricks, except one. He kept on postponing the day when he would teach him the last trick.

The boy grew in strength and skill, and no one among his contemporaries was able to challenge him. One day, he boasted in front of the king: “My teacher is unchallenged only because he is older than me and because I respect him as my teacher. Otherwise my strength is not less than his and my skill is quite equal to his.”

The King did not appreciate this boasting and ordered a match to take place. They cleared the broad wrestling ground and gathered ministers, courtiers and sportsmen to watch.

The boy charged out into the ring like a mad elephant. His master knew that his pupil was not stronger than him, so he used the 360th hold the he had never taught him. The boy did not know how to counter it. He was helpless. His master raised him with both hands above his head and smashed him to the ground. The crowd cheered wildly.

The King congratulated the champion and ordered a robe of honor to be given to him. He reproached the boy, saying: “You were ill-bred enough to dare to challenge your teacher and how you see how hollow your boast was!”

The boy answered: “O lord of the word! He did not overpower me with his strength but rather because of one trick which he never accepted to teach me. Today this one trick gave him the victory.”

The King retorted: “It was just for such a day that he had kept his trick! Have you not heard what the wise say? “Never give a friend such power over you that if one day he tries to be your enemy, he can defeat you.”

The teacher betrayed by his pupil said: “There is no such thing as loyalty in this world, or at least no one today knows the meaning of loyalty. Whoever learned a trick from me, finally tried to do me down.”

A dervish was once sitting alone, meditating in a patch of desert. A ruler passed by. The dervish, being free from the cares of this world, neither lifted his head nor paid any attention. The ruler, with the violent pride of power, was furious and said: “These dervishes in their patched cloaks are no better than animals!”

His minister scolded the dervish and said: “The great ruler of all the world passed by and you did not stand and bow: why were you so rude?”

The dervish replied: “Tell your king to expect those people to bow who hope for some reward from him. Tell him that rulers are there to protect their people. The people were not created just to obey rulers. The ruler is the watchman of the poor, though he has greater wealth and glory. The sheep are not made for the shepherd, rather the shepherd is there to serve the sheep. Look around you: today you see one man carefree and successful, the other struggling sore-hearted to survive. Wait a day or two, and see how the earth devours the brain once troubled with so many foolish thoughts! When the irresistible decrees of Fate are issued, neither king nor slave remain. Open up the tomb and and search these dusty bones: can you tell which was the rich man or which was the pauper?”

The ruler was struck by the words of the dervish. He said: “Ask me a favor!”

The dervish replied: “I would ask you to never disturb me again.”

The king begged: “Give me a word of advice!”

The dervish replied: “Now that wealth is in your hands, realize before it is too late, that this wealth and this power pass from hand to hand.”

Money Does Not Make The Man

I saw a pot-bellied fool wearing expensive clothes while sitting on a fine Arab horse. A bystander asked me: “What do you think, Sa’di, of these fine silks on that crass idiot?”

“It is like bad writing in gold ink. That ass has none of the moral qualities of a human being. All his pretences are false, all his possessions acquired dishonestly; he is fit only for a slaughter-house. A person of quality may fall on hard days, but never think his quality is any the less for his being impoverished. A man who makes quick money dishonestly can plate his house in gold, yet no one will forget the base stock he sprang from.”