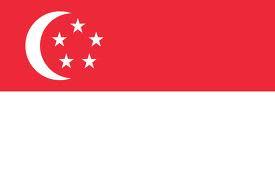 The island nation of the Republic of Singapore lies one degree north of the Equator in Southern Asia. The country includes the island of Singapore and 58 or so smaller islands. Because of its efficient and determined government, Singapore has become a flourishing country that excels in trade and tourism and a model to other developing nations. The capital city, also called Singapore, covers about a third of the area of the main island.

Although Singapore has a long history, its recent commercial development can be seen as beginning in 1819 when Sir Thomas Stamford Raffles annexed it for the British Crown. The purpose for the annexation was to establish a trading post for the East India Company. At the time, the island was sparsely inhabited by Malay fisherman. The population increased as immigrants were brought in from China and India. These immigrants helped to develop facilities for a port. Trade and settlement grew under British rule until 1942, when the Japanese took over the island. The British returned in 1945 when the Japanese surrendered at the end of World War II. With the election of the first Prime Minister, Lee Kuan Yew in 1959, Singapore achieved independence from the British, who were never able to regain the same power that they had held in Singapore before the war. It was in 1965 that Singapore withdrew from the Federation of Malaysia and became a totally independent nation. Since then, Singapore has worked toward becoming Asia’s number one spot for trade, tourism and finance.

Borders:
Johor Strait to the North; Pacific Ocean to the East; Strait of Malacca to the Southwest; Indian Ocean to the West. Singapore Island is locate at the southern tip of the Malayan Peninsula.

The climate is tropical, with an average daytime temperature around 80ºF (26ºC). Evening temperatures are only slightly lower. Rainstorms occur on about 40% of all days in Singapore, with heavy rainfall from November to January. Rainstorms are usually short and intense.

The feel of the island comes from the cultural diversity of Singapore. The population is made up of Chinese, Malays, Indians and Eurasians. Although citizens of all races think of themselves as Singaporean, there are still certain areas that are inhabited by specific ethnic groups. Each area has its own culture celebrating its own religion. Each religion has many colorful festivals to commemorate days of special significance.

Languages: The four official languages of Singapore include Mandarin, English, Malay and Tamil.

General:
Do not use first names unless you are invited to. Use Mr., Mrs. or Miss as titles.

Obey the laws, as they are strictly enforced. Fines will be levied for such acts as littering, smoking in restricted areas and not wearing a seat belt.

It is common courtesy to ask permission to take pictures of people, mosques or temples.

When entering a Singaporean’s house or a mosque, remember to take off your shoes.

Do not eat or offer anything with your left hand when with Muslims.

Business:
Business cards are exchanged at the beginning of a meeting. Remember to give and receive the card with both hands. It is polite to look the card over and hold it while speaking.

Brunei notes are interchangeable with Singapore notes and are quite common.

Flag: Two equal horizontal bands of red (top) and white (bottom); on the hoist side of the red band is a white crescent that is partially surrounding a circle of five white, pointed stars.

Shop Hours: Shop hours vary, although Monday to Saturday from 9am to 6pm are the most common. Some department stores, Chinese Emporiums, and stores that cater solely to tourists stay open as late as 9pm seven days a week.

Tipping:
Tipping is not very common in Singapore. It is prohibited at the airport and discouraged at hotels and restaurants, as most have already added a 10% service charge to the bill.

Taxis: Taxis drivers do not get tipped.

A visa is not required for U.S., European and Australian citizens for a stay of up to 14 days. All visitors are required to have a valid passport and onward ticket.

BE FORWARNED, DEATH FOR DRUG TRAFFICKING

Duty-Free Items: Personal effects and food preparations not exceeding $50 in value. Visitors over 18 and not coming from Malaysia are allowed to bring in duty-free 1 liter of spirits, 1 liter of wine and 1 liter of beer, also 200 cigarettes or 50 cigars or 250 grams of tobacco.

9. TRAVEL TO THE COUNTRY

Airports:
Changi Airport in Singapore is 10 miles (6km) from the city center.

Trains:
Singapore is the southern terminal of the Malaysian railway system.

10. TRAVEL WITHIN THE COUNTRY

Cars:
You can rent a car from any of the international firms, or from local car hire firms. You will need both a national and international licence. Driving is on the left side of the road, and wearing a seat belt is the law.

Trains:
Singapore’s Mass Rapid Transit (MRT) system is a new, clean and easy way to travel. The train consists of two main lines that run north-south and east-west. Coin-operated ticket-dispensing machines are located inside the main doors at each station. Money-changing machines for changin paper money to coins are located opposite the ticket machines. Enter the platform through the gates marked with green arrows. There you insert your ticket, arrow first (and facing up). The machine will open the gate and return the ticket. The same procedure is followed at your destination, except that your ticket will not be returned.

Buses:
There are two types of buses in Singapore: the Singapore Bus Service and the Trans-Island Bus Service. You can purchase a Singapore Explorer ticket that will allow you to travel anywhere for up to three days. The ticket comes with a useful map with details on major tourist destinations and whcih service to use to get there. For more information. pick up the “See Singapore by Bus” pamphlet from the STPB (Singapore Tourist Promotion Board) in Raffles City.

Ships and Ferries:
Ferry and water taxi services departing from Cliff Pier, Jardine Steps and the World Trade Centre can take you to Singapore’s outlying islands.

Arab Street
This is the Muslim center of Singapore. Attractions include the gold-domed Sultan Mosque and a variety of shops.
Singapore City

Chinatown
A maze of streets with shops that sell almost everything.
South Bridge and New Bridge area
Singapore City

City Hall
This is where Lord Louis Mountbatten accepted the Japanese surrender in 1945, and where Lee Kuan Yew declared Singapore’s independence from Britain in 1959.
St. Andrew’s Road near the Padang
Singapore City

The Crocodile Farm
This farm breeds crocodiles and other reptiles for their skins. Feeding times are 11m and 3pm daily except Mondays. Free admission.
790 Upper Serangoon
Singapore City

Jurong Bird Park
This park features more than 5,000 birds from all over the world in a lush parkland setting.
Jurong Hill
Jurong Town
Tel 265-0022

Kusu Island
A small island that, according to legend, was a turtle and transformed itself into land to save drowning sailors.
Take the ferry from the World Trade Center.
Kusu is located 7 km (4.5 miles) south of Singapore

Little India
An area full of stores, restaurants and antique dealers specializing in Indian goods. The STPB (Singapore Tourist Promotion Board) has a guidebook for the area.
Serangoon Road
Singapore City

Sentosa Island
A former military base, this island is now devoted to entertaining its guests. Within the island are museums, gardens, a butterfly park, swimming lagoons, gold courses, a large roller skating rink and more. Ferries running from World Trade Center in Singapore City daily 7:30am – 10pm

Merlion Park 26-ft-high (8m) figure of a Merlion (a mythical beast that is half-lion, half-fish), the symbol of Singapore, that sprays water into the river.
On the Singapore River
Haw Par Villa
Singapaore City

Health and sports enthusiasts will not feel left out in Singapore. Fitness centers and swimming pools are located at most of the large hotels. For golf lovers, Singapore has some of Asia’s finest golf courses. Fees range anywhere from S$40 to S$200. Most parks have tracks for jogging, and many have tennis, squash and badminton courts. In addition, sports facilities managed by the Singapore Sports Council are all over Singapore. Because of the warm climate, such sports as windsurfing and waterskiing are very popular. The best areas for these water sports are in the north of Singapore.

The food of Singapore reflects its multiethnic society. The hotels contain restaurants that specialize in dishes from all over Europe and Asia. The famous hawker centers, however, are possibly the best place to sample the various Singaporean cuisine. You can taste Indian, Malayan and Chinese dishes all in one night. These food centers can be a great experience and are part of the reason why Singapore is considered by many to be “the food capital of Asia.” There are very strictly enforced offical Public Health controls in Singapore, so it is safe to eat food from any of the restaurants or stalls.

It is important to note that smoking is completely banned in all air-conditioned restaurants.

Throats can get pretty dry in this climate, and there are many ways to quench your thirst. Many soft drinks such as Coca-Cola, Pepsi, and 7-Up are available. Other popular drinks sold in Singapore include coffee, tea, beer and tasty fruit juices. Tap water is safe to drink.

If you’re not totally exhausted from eating, drinking and sightseeing, there is plenty of nightlife to choose from in Singapore. Big hotels feature discos, lounges, cabarets and theater restaurants. For a pleasant, high-class evening, symphonies, operas and ballets are abundant. Other popular nighttime activities include late-night tours, catching a movie at the local cinema, or relaxing on a nighttime harbour cruise. A great way to enjoy the night, without spending a lot of money is to roam the streets where you can witness a variety of colorful and interesting activities.

International Access Code: 106 for Malaysia (before the country code), 104 for other countries.

Helpful literature and leaflets can be found at airports, hotels and shopping centers.