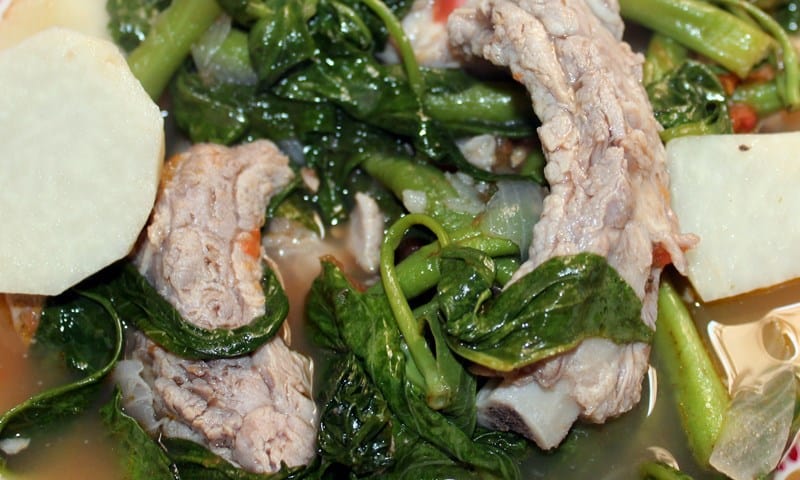 Pork Sinigang or Sinigang na Baboy is a sour soup that is part of the cuisine of the Philippines. The soup dish uses pork as the main ingredient, although beef, shrimp, fish and chicken can be used. (if chicken is used, the recipe is known as sinampalukang manok). Bony portion of pork known as “buto-buto” are generally used for this recipe; pork neck bone, chopped spare ribs, chopped baby back ribs, and pork belly. On occasion, pork kasim and pigue (pork ham) are also used.

Sinigang is traditionally tamarind-based. Variations of the dish derive their sourness from ingredients such as guava, calamansi, bilimbi (balimbíng), or unripe mango.

Seasoning powder or bouillon cubes with a tamarind base are commercial alternatives to using natural fruits.

Meat in sinigang (e.g., fish, pork, beef, shrimp, or chicken) is often stewed with tamarinds, tomatoes, garlic, and onions. Other vegetables commonly used in the making of sinigang include okra, taro corms (gabi), daikon (labanós), water spinach (kangkóng), yardlong beans (sitaw) and eggplant (talóng). Most Filipinos like to cook sinigang with green long peppers in order to enhance the taste and add a little spice to the recipe.

Sinampalukang manók or sinampalukan (from sampalok) is not considered a variation of sinigang because the chicken has to be sautéed in ginger first instead of all the ingredients being placed simultaneously into the pot and brought to a boil. Sinampalukan is also distinguished by its use of shredded tamarind leaves, and is usually made together with ginger, onions, tomatoes, eggplant and spinach.