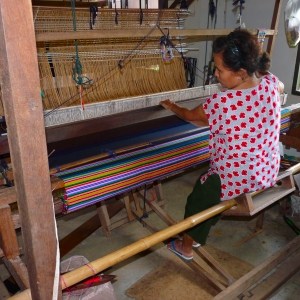 The Tai Lue (Dai Lue) have one of the oldest recorded histories, the first Lue Kingdom was formed in southern Yunnan in 1180. The original areas controlled by the Tai Lue included both sides of the Mekong River in the Sipsongpanna region of Yunna, southern China. The “Sipsongpanna” (or “Xishuangbanna”) Dai are the Dai Lue or Tai Lue people. Today, the Tai Lue in China are also known as the Shui Dai or “Water Dai.”

According to Tai Lue history, there were five city-states on the east bank and six on the west, which with Chiang Rung formed twelve “rice-field” divisions. These were:

Some portions of these Tai Lue either voluntarily moved during the Mongol invasions of southern China, or were forcibly herded from these city-states from around two hundred years ago, arriving in countries of present-day Laos, Thailand and Myanmar.

During World War II, Yunnan suffered badly in the fighting between the Allies and the Japanese. Siam was then occupied by, and an ally of, the Japanese. Sipsongpanna was subjected to widespread bombing because of the suspected presence of Chinese troops. Many Tai Lue fled to Burma and northern Thailand at this time.

Tai Lue workers were forcibly brought to Thailand from Sipsangpanna (today, the southernmost district of Yunnan, China, known in pinyin as Xishuangbanna). Forced migrations were made by various local Lanna rulers, to help repopulate the region after the removal of the Burmese / Mon. In the twentieth century, voluntary migration from Yunnan continued as late as the 1950s. Today the Tai Lue have a strong cultural presence in both Phayao and Nan Provinces of northern Thailand. There are an estimated 300,000 Tai Lue people living in Thailand’s northern provinces of Chiang Rai, Phayao, Nan, Chiang Mai and Lamphun. Many of the “Tai Yong” who migrated to Thailand from Muang Yong in Myanmar were originally Tai Lue.

The women wear very colorful, long sarongs and short blouses, and their long black hair is usually done up in a fan-shaped bun on the back of the head. Often, a flower or comb is stuck in the bun. They lived in large stilt houses clustered in villages along the edges of river valleys, and cultivated paddy rice. Tai Lue wat (temple) complexes are usually situated at the highest point in the village, with the village’s houses arranged in a pattern around it, but lower on the hillside.