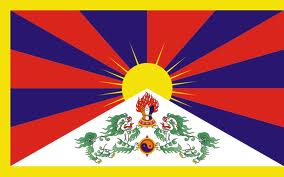 Table of Contents show
1 The Tibetan Flag
1.1 Introduction
2 An Explanation of the Symbolism of the National Flag of Tibet
3 The Dalai Lama
3.1 EDUCATION
3.2 POLITICAL CAREER
3.3 TRIBUTES TO THE DALAI LAMA
3.4 Degrees and Awards
3.5 For more about His Holiness the Dalai Lama, visit The Official Office of Tibet Site.

“The Tibetan national flag is intimately connected with the authentic history and royal lineages of Tibet which are thousands of years old. Furthermore, in the Tibetan Royal year 820 or in the seventh century of the Christian era, at the time of the Tibetan religious King Song-tzan Gampo the Great extensive land of Tibet was divided into large and small districts known as “g?-kyi tong-de” and “yung-g’i mi-de”. From these large and small districts, an army of 2,860,000 men was chosen and stationed along the borders of Tibet, and the subjects thus lived in safety. The bravery and heroism of the Tibetan people at that time in conquering and ruling even the adjacent empire of China is well-known in world history.

“At that time, it is recorded that the regiment of Yi-ru ti had a military flag with a pair of snow-lions facing each other; that Y?-ru m? had a snow-lion with a bright upper border; that of Tzang Ru-iao, had a snow-lion standing upright, springing towards the sky; and the flag of ?-ru t? had a white flame against a red background, and so forth. In this way. the regiments of each area had its own individual military standard. Continuing with that tradition up to the beginning of the twentieth century, various regiments within the Tibetan army have had military flags with either a pair of snow-lions facing each other, or a snow-lion springing upwards and so forth.

“In the latter part of this period, during the rule of His Holiness the Great Thirteenth Dalai Lama, this eminent spiritual and temporal ruler of Tibet enacted many modifications in administrative policies in accordance with international customs. Based on the formats of previous Tibetan military flags, His Holiness improved upon them and designed the present, modern national flag. With an official proclamation, He declared that this would be the uniform, standard flag to be adopted by all Tibetan military defence establishments. Since the time of that proclamation, all Tibetan regiments have likewise adopted this flag as their standard.

“The colour scheme of the Tibetan national flag gives a clear indication of all aspects of Tibet in its symbolism such as the geographic features of the religious. snowy land of Tibet, the customs and traditions of Tibetan society, the political administration of the Tibetan government and so forth.

“History attests to the fact that Tibet is one of the most ancient nations of the world. Therefore, in all the three regions of Tibet, irrespective of caste and creed, this national flag inherited from our ancestors is universally accepted as a common, peerless treasure and even today still continues to be highly respected and esteemed as in the past.”

An Explanation of the Symbolism of the National Flag of Tibet

A Brief Biography of the Dalai Lama

His Holiness the 14th Dalai Lama of Tibet was born in 1935, soon after the 13th Dalai Lama passed away. He was the fourth son of a poor peasant family in Takster village, Amdo province, eastern Tibet.

The line of Dalai Lamas*, spiritual and temporal rulers of Tibet since the 13th century, is a succession of incarnations. A Dalai Lama is not appointed or elected; he is born to the position. Each Dalai Lama is a reincarnation of the previous one. Tibetans regard the Dalai Lamas as the human embodiment of Avalokiteshvara (in Tibetan, Chenrezig), the deity of compassion, who chooses to return to the world to serve humanity. Before each Dalai Lama dies, he leaves signs to indicate where he will take his next rebirth.

In accordance with tradition, search parties were sent to find the successor to the thirteenth Dalai Lama. Two years later, following the various signs and portents, a government party was led to Takster, where they found the infant Lhamo Thondup. After a series of tests, the child (later named Tenzin Gyatso) was recognized as the 14th incarnation of the Dalai Lama

But by then the Chinese had control of Amdo. The local leader demanded a huge ransom before he would release the child. After two years of negotiations, the young Dalai Lama and his entourage were allowed to leave Amdo and travel to Lhasa, the capital of Tibet, where he was officially installed in the Potala palace.

The Dalai Lama’s education as a Buddhist monk began in earnest when he was six. After eighteen years of intense study, he graduated with the equivalent of a Ph.D in Buddhist metaphysics. It was granted after a three-month oral examination in public before thousands of monks and scholars.

In 1958 he took preliminary examinations at each of the three monastic universities, Drepung, Sera and Ganden. The final examination was held in 1959 at the Jokhang Temple in Lhasa. That morning, the young scholar was examined by 30 scholars of logic. In the afternoon, he debated Buddhist philosophy with 15 scholars, and in the evening, 35 more scholars tested his knowledge of the canon of monastic discipline and metaphysics.

The Dalai Lama passed with honours, attaining the highest academic degree of Geshe Lharampa, while under intense political pressure from the Chinese to capitulate to their demands to take over Tibet.

* “Dalai” is a Mongolian word meaning “ocean”, and “Lama” is a Tibetan term corresponding to the Indian word “guru” or teacher.

A regent was appointed during the Dalai Lama’s minority, but in 1950, at just 16 years old, he was forced to assume full political power. The crisis was precipitated by the Chinese communist invasion. Much of the country was occupied and armed Chinese garrisons were established. With the Tibetan army no match for the invading forces, the Dalai Lama’s only option was to negotiate.

In 1954 he was invited to Beijing where he and his party met Chairman Mao, Chou En Lai and other Chinese leaders intent on convincing them they would be better off under Chinese rule.

In 1956 His Holiness visited India, where he met Nehru but won little support for the Tibetan cause.

In 1959 the Tibetans rebelled, the Chinese crushed the uprising and the Dalai Lama was forced to flee across the Himalayas to neighbouring India.

His Holiness immediately established a democratic government-in-exile dedicated to work for the freedom of Tibet and the welfare of Tibetan refugees. With the help of the Indian Government, he set up schools, including English, Hindi and western-style education, along with Tibetan language and culture.

Then came handicraft factories, hospitals, orphanages, monasteries and cultural institutions — the foundation for a new Tibetan society. There are now 53 Tibetan refugee settlements in India.

In the early days of exile the Dalai Lama found it difficult to rally international political support for his people. However three UN General Assembly resolutions were passed in 1959, 1961 and 1965 condemning China for “violations of the fundamental human rights of the Tibetan people”. Then in August 1991, after the violent repression of political demonstrations in Lhasa, the United Nations again passed a resolution criticising Chinese policies in Tibet and calling on the Chinese “to fully respect the fundamental rights and freedoms of the Tibetan people.” Recently a number of governments, including the United States, Germany and France, have spoken out against continued Chinese repression in Tibet.

In the last decade, at the invitation of groups and governments, the Dalai Lama has travelled the world, seeking support for the Tibetan cause and sharing his belief in kindness and compassion as the ultimate solution to personal and political conflict.

Since his first visit to the West in 1973, he has met many world leaders, among them the Presidents of the United States, France and Germany, the Prime Ministers of the United Kingdom, Australia and New Zealand, members of European royalty, including Prince Charles and the King of Norway, and civic and religious leaders, including His Holiness Pope John Paul II.

The Dalai Lama has addressed the United States Congress, the European Parliament, and innumerable University, inter-faith and civic gatherings. In September this year he will be the keynote speaker at a major environmental conference in Sydney.

TRIBUTES TO THE DALAI LAMA

“His Holiness has become over the past 30 years a symbol of peace and a leading international spokesperson for the cause of non-violent social change. His spiritual and political leadership of Tibetans has been the principal force for the preservation of the Tibetan culture and way of life.” (Congressional Record, July 1989)

“The Dalai Lama’s one of the very few individuals or male leaders who is soft, and feminist-thinking and also ecological and decentralized in his thinking. There are very few male leaders like that in the world. I think this Dalai Lama is probably the most political and the most effective in bringing across that non-violence is the only solution in the atomic age.”

“The Dalai Lama is a most impressive person. He is strong and alert, bigger than I had expected … a very solid, energetic, generous and warm person, very capably trying to handle enormous problems — none of which he mentioned directly. There was not a word of politics. The whole conversation was about religions and philosophy and especially ways of meditation.” (From his Asian Journal, after meeting the Dalai Lama in 1968)

“The Dalai Lama taught us a lot about Buddhism, even more about menschlichkeit [being human], and most of all about Judaism. As all true dialogue accomplishes, this encounter with the Dalai Lama opened us to the other faith’s integrity. Equally valuable, the encounter reminded us of neglected aspects of ourselves, of elements in Judaism that are overlooked until they are reflected back to us in the mirror of the Other.”

The Dalai Lama has received honorary degrees from:

Among the awards received by His Holiness are:

For more about His Holiness the Dalai Lama, visit The Official Office of Tibet Site.