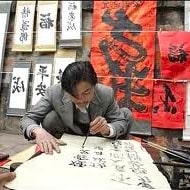 The soul of Hue is revealed in Calligraphy

VietNamNet Bridge – When speaking of art genres, one can’t help mentioning Hue calligraphy with famed calligraphers, such as Minh Duc Trieu Tam Anh, Hai Trung and Nguyet Dinh who have created unique calligraphic artworks. Nguyet Dinh is well-known as the author of the calligraphic book “Truyen Kieu” (The Tale of Kieu by the great Vietnamese poet Nguyen Du in the 19th century).

Hai Trung usually goes abroad every year to promote the art of calligraphy while Minh Duc Trieu Tam Anh’s calligraphic artworks are seen i n many places of worship or monasteries.

In Hue, calligraphic works are already printed and sold on street’s pavements or i n bookshops. Especially when Spring comes, calligraphers are eager to perform the form of writing to bring the happiness to families during the Tet holiday.

At Festival Hue 2006, a garden displaying the best calligraphic artworks by 17 calligraphers in Hue Calligraphy Club was held in Thuong Bac Park by the romantic Huong River. The purpose of the display was not only to honour the art but also to introduce viewers the quiescence of Hue’s culture. Among works at the garden, the 32kg calligraphic work “Luc Van Tien” (the poem by Nguyen Dinh Chieu in the 19th century) with 2,088 of Iines of verse was the longest piece which was written in Vietnamese script and nom (Chinese characters) on a 124m long white bro cade cloth by Nguyen Phuc Vinh Tho and his colleagues. The book, including 286 pages with each page of 45cm in width and 85cm in length, has a gilt wooden cover carved skilfully and images arranged in the style of four paintings of mai (apricot), Ian (orchid), cuc (Chrysanthemum) and Truc (bamboo).

Besides, the calligraphic version “Nhat ky trong tu” (Ho Chi Minh’s Prison Diary) – the heaviest and most unusual work of art which is created by calligrapher Nguyen Nhuan Duc and others in Hue Calligraphy Club — also surprises calligraphy lovers.

In the book, each poem was written in Chinese characters in different styles and then was embossed and red-lacquered on a wood board of 1 cm in diameter, 1015kg in weight and 0.25m in thickness. The book with 133 poems is expected to be completed in 2009 with the weight of more than two tonnes, the height of 3.4m and the total length of pages of 80m. Also in the garden were more than 300 works of Hue Calligraphy Club and others of Da Nang Calligraphy Club.

The art of calligraphy is not only seen at Festival Hue but also in many places with different styles which has long become indispensable part of Hue’ culture.