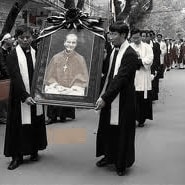 Saigon (MF) The Vietnamese attach great importance to two traditional family obligations to care for their parents in their old age and to mourn them in death. These duties are felt so strongly, they are considered sacred. The traditional time of mourning for parents is three years. Mourning begins even before death is imminent. When death is about to take place, the entire family assembles around the dying relative. A strict silence is observed. The eldest son or daughter bends close to record the last words of advice or counsel. At this time, the eldest child suggests a name for the dying person for it is considered unfortunate to continue the same name used in life after the relative has died. Men usually take the name “Trung” which means faithfulness or “True” which means loyalty. Women are usually called “Trinh” which means devotion or “Thuan” which means harmony.

According to ritual, when the parent has died, the children do not, as yet, accept the idea of death. They place a chopstick between the teeth of the deceased and place the body on a mat on the floor in an effort to “bring it back to life”. The next rite in this tradition is for the eldest son or daughter to take a shirt the deceased has worn in life and to wave it in the air and call upon the soul of the dead to return to the body. After this rite has been completed, the descendants then perform the ceremonial cleansing of the body. The corpse is bathed which symbolizes washing off the dust of the terrestrial world; hair is combed and nails clipped. Money, gold and rice are placed in the mouth of the dead to indicate that the deceased has left this world without want or hunger. The corpse is then wrapped in white cloth and placed in a coffin. Members of the family form a honor guard around the clock until a propitious time for burial is selected.

During the period of mourning, descendants wear special mourning clothing. These garments are made of crepe of ample cut with a seam in the middle of the back. All are required to cover their heads. In times gone by when Confucianism was still a dominant influence in life, mourning the dead was considered more important than the affairs of the living. A mandarin had to resign his position and retire to his home. He was expected to erect a tomb where the parent was buried and there conduct memorial ceremonies. Mourners could not marry, comb their hair or have a haircut. They were not permitted to eat good food or enjoy any form of entertainment whatsoever.

The Vietnamese writer Le Van Sieu explained the importance of traditional funeral ceremonies by saying “Funeral rites represent a traditional way of life to the Vietnamese people. They are based on the concept of the indestructible soul and the close relationship between members of the same blood line. By assuming this responsibility, generation after generation retains the strong fabric of our society”.