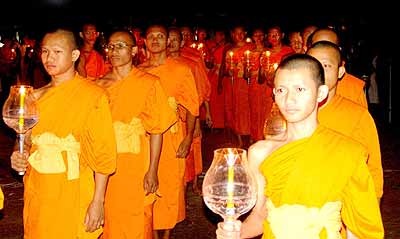 Not a secret anymore, but still spectacular

What used to be almost a secret, or at best only known to a few foreigners living in Chiang Mai, has nowadays developed into a more well known activity. The Yee Peng celebrations and festivities at the Meditation Center of Maejo University have become more and more popular, yet are still dominated by the presence and participation of a vast majority of Thais. And it should stay that way.

Far from the beaten tracks of the more commercialized festivities, the Maejo Yee Peng (Loy Krathong) celebrations in Sansai reflect and emphasize the genuine tradition of Thailand’s most romantic elements of its calendar, those being reflection, meditation, and tranquility. Shown here, hundreds of monks lead the procession to a huge golden statue of the Lord Buddha.

Far away from the beaten tracks of the nowadays quite commercialized festivities, sporting anything from funny hats, fireworks and excessive noise, the Maejo celebrations reflect and emphasize the genuine tradition of Thailand’s most romantic element of its calendar, those being reflection, meditation, and, by far and foremost, tranquility.

Over a hundred monks were seated in a semicircle around a moonlit stage.

Upon arrival, after having successfully completed the parking arrangements, visitors were greeted by traditional and festive dancers, as well as very well-spoken and bilingual (!) Thai students, who escorted the impressed guests to one of thousands pre-arranged sitting areas, complete with an unlit oil lamp.

Shortly after the sunset, local dignitaries were led to their seats, accompanied by hundreds of Thai candle dancers. By that time, thousands of visiting worshipers had assembled around a semicircular stage, where over 100 abbots and monks in their orange robes had illuminated their candles and taken their seats, starting their sermons. English translations were given at almost all times, a fact very much appreciated by all those not overly familiar with the Northern Thai language. Visitors were reminded to turn off their mobile phones, and a peaceful silence, almost supernatural, fell over the area. The gentle words of the Abbot were only interrupted by a few firecrackers from the neighborhood.

The procession was joined by Thais and foreigners alike.

The sermon was completed, and hundreds of monks, dignitaries and visitors encompassed the stage, worshipping the huge golden statue of the Lord Buddha, positioned in a moonlight glow on top of the stage.

Then, the moment everyone had been waiting for arrived, the venerable monk’s voice was heard praying to send all sins and bad luck together with the lanterns into the sky. Loudspeaker voices told people to hold on, to not let go, and to await the signal to release the Komloys simultaneously. When the signal was heard, the sky was filled with thousands of illuminated balloons, drifting off into infinity, taking with them sins and bad thoughts – a truly breathtaking and magic sight. To watch the magnificent and colorful fireworks display, the monks processed from the stage, and joined the clapping and smiling people. An overwhelming and memorable experience came to an end, and won’t be easily forgotten.

The moment had come – the Komloys were about to be released.

Thousands of Komloys filled the sky.

The moment had come – Many photos of the scene that night

Thousands of Komloys filled the sky, while thousands of people enjoyed themselves