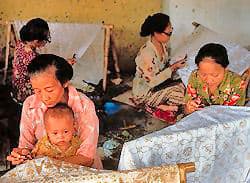 Batik making, practiced almost exclusively on Java, involves a complex wax-resistance process in which all parts of a cloth that are not to be dyed are coated on both sides with wax before the cloth is dipped into the dye. Using a penlike wax holder called a canting, it is possible to create intricate and elaborate designs. It is a time-consuming process, and those batik fabrics that are made entirely by hand take several weeks to complete. Much modern batik is made using copper stamps (caps) to apply the wax, thereby greatly speeding up the process and lowering the cost.

On woven fabric, which is made everywhere from Sumatra through the eastern islands, the most characteristic element is the key-shaped figure combined with other geometric figures. The rhombus (an equilateral parallelogram usually having oblique angles) frequently occurs together with straight lines, equilateral triangles, squares, or circles, which permits an enormous number of variations, including stylized representations of human beings and animals. Each island or region has its characteristic patterns, which serve to identify the area in which the cloth is made.

The art of weaving is highly developed. It includes the famous ikat method, in which the thread is dyed selectively before weaving by binding fibres around groups of threads so that they will not take up colour when the thread is dipped in the dyebath. This process may be applied to the warp, which is most common and is found in Sumatra, Borneo, and Sumba. Weft ikat is found mainly in south Sumatra, and the complex process of double ikat is still carried on in Tenganan in Bali, where such cloth has great ceremonial significance.

The National Museum in Jakarta has an extensive collection of Indonesian carvings, textiles, and artifacts; in addition, it contains models of traditional houses and villages from various parts of the country. The Jakarta Museum displays historic material of the city. There are a number of other museums throughout the country, the most notable of which are the Radya Pustaka in Surakarta (Solo, or Sala) in central Java, the Museum Bali in Denpasar, and the Ratna Warta Fine Arts Museum in Ubud in Bali. The Presidential Palace in Bogor, which has a fine collection of Indonesian art, is located adjacent to the Botanical Gardens.