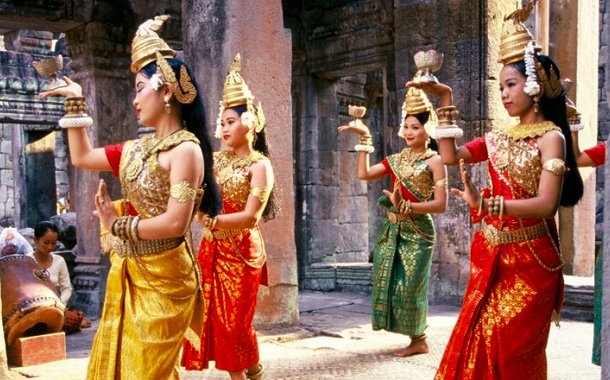 Khmer architecture reached its zenith during the Angkorian era (seen in Angkor Wat and the structures of Angkor Thom). Many fine examples of Khmer sculpture can be found in the National Museum in Phnom Penh. Cambodia’s classical dance is highly stylised and usually accompanied by an orchestra or choral narration.

Theravada Buddhism is the dominant religion. Khmer is Cambodia’s official language and can often prove difficult for foreigners. For over a century, the second language of choice was French, which is still spoken by many people who grew up before the 1970s. English has recently surged in popularity.

A Cambodian meal almost always includes a soup, which is eaten with the other courses. Fish is the nation’s mainstay, and grilled freshwater fish, wrapped in lettuce or spinach and dipped into a nutty fish sauce, is a particular speciality. `Salad’ dishes are flavoured with coriander, mint and lemon grass – three flavours which find their way into many Cambodian dishes. The French influence is seen in the bread, baked turtles and frogs legs which are sold in the markets. Sweet dishes include sticky rice cakes and jackfruit pudding. The most popular local drink is soda water with a squeeze of lemon.

Khmer, also known as Cambodian, is the official language of Cambodia. In contrast with Chinese, Vietnamese and Thai, the Khmer language is nontonal. Words are mostly short, usually one syllable. Longer words are often loan-words from other languages such as Indian Sanskrit and Pali. The Khmer alphabet has 33 consonant symbols, 21 dependent vowel symbols and 12 independent vowel symbols. The richness of Khmer is reflected by its four sets of vocabulary: one used for people of equal status, one used while speaking to the respected people such as elderly persons or superiors, one used when addressing monks, and one for the royal family. This language is often seen as an ambiguous one because it contains many hidden meanings. Language barrier is often a problem for Cambodian Americans, specially the adult ones who are also illiterate in their own language.

Cambodians give their children meaningful names that rhyme with the names of other family members. Surnames come first in Cambodia. Upon marriage, a woman takes her husband’s first and last names like the Vietnamese.

The official religion of Cambodia was Theravada Buddhism, one of the two major forms of Buddhism. In 1989, the Cambodian government recognized Buddhism as the state religion. It represents an important source of Khmer national identity and of its value system. More than 80% of Cambodians are Buddhist. Very few are Muslim, Christian or Hindu. Until recently, each Cambodian male had to spend some time in the Temple as a monk in order to “show obedience to his parents and to learn the good ways of life.”

The Cambodian value system was influenced by several cultural traditions: Khmer, Indian and French, and originated from two distinct religions: Brahmanism and Theravada Buddhism. It represents a set of values based on system of classes and hierarchy where respect and deference between people of superior and inferior ranks must be observed. The influence from Theravada Buddhism includes religious detachment from worldly affairs and individual responsibility for status in life. It also emphasizes the avoidance of causing suffering, self-discipline, humility and harmonious relations with others. The French culture has left its marks on government and educational system. However its influence only penetrated in urban areas. Cambodians believe that individuals should adhere to the Buddhist code of personal conduct. The group or community (seen as extended families) is more important then the individual, as are ancestors and rulers. The individual’s good conduct and services to the community will gain him respect from others and in turn, he may be awarded with a high position within the religious, governmental or community organizations.

There are two basic dishes in Cambodia: soup and rice. Soup may include fish, egg, vegetables or meats. Rice is prepared in several ways and is eaten in every meal. Seafood and fish are common in addition to vegetables and fruits. Num Ansom (cylinder cake), Non Kaom (sweet, coconut sticky rice cake), Samlaw Misuor (noodle soup) are among the food for special occasions. Cambodians use chopsticks, spoons or their fingers depending on the food and family custom.

A typical Cambodian family consists of parents, children, and often grandparents. It is normal to see 3 or 4 generations living together in the same household. The Cambodian husband is in charge of affairs outside of the house while the wife deals with all household matters. In the United States, this division of labor between spouses is often difficult to observe due to working situations and this is often a source of family conflict. The elderly parents live with their children until their death. Cambodian families are usually large as having no children is considered a misfortune to the Cambodians.

Several festivals are held annually which are of interest to both international and domestic tourists. The major festival are as follows: