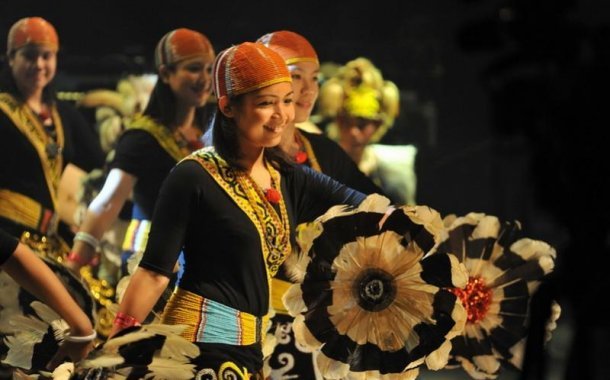 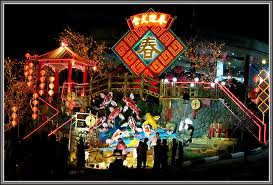 In Brunei festivals are always celebrated with colour, enthusiasm and happiness. Young and old from different races come together in a spirit of unity that we are justifiably proud of. We

invite you to join us, and enjoy the unique traditions that have been passed down to us by preceeding generations. National Day Celebrations

National Day is celebrated on the 23rd of February, and the nation begins to gear up for this momentous occasion about two months beforehand. Schoolchildren, civil servants and private sector representatives rehearse for their part in colourful crowd formations and flash card displays. Invariably a sell-out, the event takes place in the Hassanal Bolkiah National Stadium before about 35,000 spectators. Thousands of others watch the live nationwide telecast. His Majesty the Sultan and other members of the Royal Family will be present. In recent years the Ramadan fasting period has coincided with the National Day celebration resulting in a more low key affair.

Awal Ramadhan
The month of Ramadhan is a holy month for Muslims. It is a period of fasting, and Muslims abstain from eating and drinking between dawn and dusk for the whole month. Foodstalls, which sell a wide variety of local delicacies such as cakes, pastry and fruit, spring up in many areas – notably around the National Stadium This is a good time to try some special local dishes and cakes-at low cost. During fasting hours it is considered ill-mannered, (even offensive) to publicly eat, drink, smoke etc. Do not offer even coffee to a muslim person during these times to avoid embarrassment .

Hari Raya Aidilfitri
Hari Raya is a time for celebration after the fasting month of Ramadhan. Prayers are held in the early morning of the first day at every mosque in the country. This day is usually an occasion for. The second day normally means open house; an invitation for all to visit. Special festive dishes are made, including ketupat (rice cakes), satay (beef and chicken kebabs), rendang (spicy marinated beef) and many others.

His Majesty the Sultan also throws his doors open to the people at the Istana Nurul Iman. This gives the people and visitors a chance to meet His Majesty and other members of the Royal Family, in order to wish them Selamat Hari Raya Aidilfitri. This is defintely an offer which should not be missed. When visiting you should dress conservatively.

Royal Brunei Armed Forces Day
The formation of the Royal Brunei Armed Forces is commemorated every year on the 31st of May, and the event usually takes place at the Taman Haji Sir Omar Ali Saifuddien in the heart of the city. It consists of a military parade and displays, such as a parachuting show or battle demonstration. In other districts, units of the armed forces organise local parades and displays for the public.

Hari Raya Aidiladha
This is also known as Hari Raya Koran. It marks the time when Muslims embark on the Haj, or holy pilgrimage to Mecca. The usual practice – for those who can afford it – is to sacrifice goats and cows. The meat is then distributed to relatives, friends and those who are less fortunate.

His Majesty the Sultan’s Birthday 15th of July
This joyous occasion is one of the most important events in the national calendar, with events and festivities taking place across the whole country. It usually starts when the people gather at the Taman Haj i Sir Muda OmarAli Saifuddien, in the centre of Bandar Seri Begawan. His Majesty meets his subjects there and delivers a titah, or speech, to mark the occasion. Afterwards there is an investiture at the Istana Nurul Iman and, for the next two weeks or so, a series of processions, parades and celebrations. Fireworks displays take place and night markets – pasar malam – open up to sell food and drinks to the crowds.

Birthday of the Prophet Muhammad
This occasion is better known in Brunei as Mauludun Nabi SAW. Muslims gather at the Taman Haji Sir Oman Ali Saifuddien to honour the occasion. There are readings from the Holy Koran and an address on Islam from the Ministry of reliroys Affairs to open the function. His Majesty the Sultan also gives a speech and then, along with other members of the Royal Family, leads a procession on foot through the main streets of Bandar Seri Begawan. The Prophet’s birthday is also celebrated at the same time in other parts of the country, with lectures, religous functions and other activities.

Chinese New Year
This festival is celebrated by the Chinese community and lasts two full weeks. It begins with a reunion dinner on the eve of the celebration which, traditionally, all members of the family attend. Open house is declared and everyone is invited to feast on sumptuous spreads of food and drink. Unmarried youngsters are given ‘ang pow’ – gifts of money in little red packets.

Christmas Day
Although not celebrated on a wide scale, Christmas Day is nevertheless a joyous and colourful occasion, well received by the nation. It is centred on Bandar Seri Begawan and the Belait District, where the greatest concentrations of Christmas expatriates live. They also hold “open house” to entertain their friends and colleagues.

Festival of Sacrifice: January 22 This is also known as Hari Raya Korban or Hari Raya Aidiladha. Goats and cows are sacrificed to commemorate the actions of the Islamic Prophet Ibrahim. The meat is then distributed among relatives, friends and the less fortunate.

Chinese New Year: February 9 Celebrated by Brunei’s large Chinese community, this festival lasts for two weeks. It begins with a family reunion dinner on the eve of the Lunar New Year. For the next two weeks, families visit one another bringing with them oranges to symbolize longevity and good fortune. Traditional cookies and food are sold throughout cities and towns during this festivity. Unmarried young people and children will receive angpow or little red packets with money inside, a symbolic gesture to ensure good luck, wealth and health for the coming year.

National Day: February 23The entire nation celebrates this joyous occasion, which many Bruneians prepare for months in advance. Schoolchildren, private sector representatives and civil servants work hand-in-hand rehearsing their parts in flash-card displays and other colourful public gatherings. In addition, mass prayers and Islamic scripture readings are held at mosques throughout the country.

Birthday of Prophet Mohammad: April 21An address from officials of the Ministry of Religious Affairs marks the beginning of this auspicious occasion, and Muslims throughout the country honour the event with readings from the Holy Koran. His Majesty the Sultan also gives a royal address and, with other members of the Royal family, leads a procession on foot through the main streets of the capital. Religious functions, lectures and other activities are also held to celebrate nationwide.

His Majesty The Sultan’s Birthday: July 15This is one of the most important events in the national calendar, with activities and festivities held nationwide, beginning with a mass prayer throughout the country. On this occasion, His Majesty the Sultan delivers a royal address, followed by an inauguration ceremony held at the Istana Nurul Iman palace. The event is also marked with gatherings at the four districts where His Majesty meets with his subjects.

Ascension of the Prophet Mohammad: September 1This holiday, significant to the Muslim world, celebrates the occasion when the Islamic prophet Mohammed was awakened by the Angel Gabriel, led to Jerusalem, and ascended into heaven. This night is observed by special prayers and gatherings at local mosques.

Teacher’s Day: September 23Teachers’ Day is celebrated to recognise the service of the teachers to the community, religion and the nation. It is celebrated in commemoration of the birthday of the late Sultan Haji Omar ‘Ali Saifuddien Saadul Khairi Waddien, the 28th Sultan of Brunei, for his contributions to the field of education. On this occasion, three awards to honour outstanding teachers are awarded. (Not a public holiday)

Public Service Day: September 29Public Service Day is held to uphold the aspiration of the Government of His Majesty the Sultan to create an efficient, clean, sincere and honest community dedicated to public service. Public Service Day commemorates the promulgation of the first written Constitution in Brunei Darussalam. It is celebrated with the presentation of meritorious service awards to ministries and government departments. (Not a public holiday)

Start of Ramadan: October 5Ramadan is a holy month for all Muslims. This marks the beginning of the period of fasting — abstinence from food, drink and other material comforts from dawn to dusk. During this month, religious activities are held at mosques throughout the country. Visitors should note that businesses may operate on abbreviated schedules during this time.

Anniversary of the Revelation of the Koran: October 22Another important holiday in the Muslim world, this day marks the occasion when the Koran was revealed to the prophet Mohammed. It is a time of quiet reflection on faith and the teachings of the Islamic holy book.

Hari Raya: November 3 – 5Hari Raya is a time for three days of celebration after the end of the fasting month of Ramadan. On the first day, prayers are held at mosques throughout the country. Families gather to seek forgiveness from elders and loved ones, adorned in traditional dress. Special festive dishes are made especially for Hari Raya, including satay (beef, chicken or mutton kebabs), ketupat or lontong (rice cakes in coconut or banana leaves), rendang (spicy marinated beef) and other tantalizing examples of national cuisine. It is on this auspicious occasion that Istana Nurul Iman is open to the public. This provides the public and other visitors with the opportunity to meet His Majesty and the Royal Family and see the world’s largest residential palace.

Christmas Day: December 25Throughout the world, 25th of December marks Christmas day, a significant day for all Christians. Christmas in Brunei is a joyous and colourful celebration enjoyed by Christians throughout the nation.