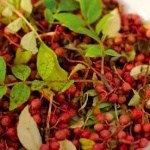 What is Chuan lao hui (Hwajiaw Oil)?  It has an interesting flavor, kind of bitter. 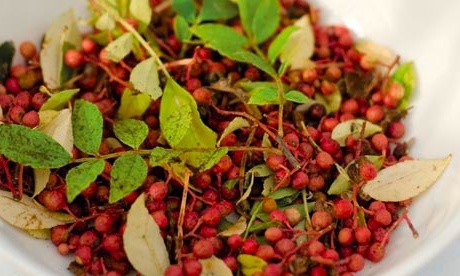 Sichuan pepper (or Szechuan pepper) is the outer pod of the tiny fruit of a number of species in the genus Zanthoxylum (most commonly Zanthoxylum piperitum, Zanthoxylum simulans, and Zanthoxylum sancho), widely grown and consumed in Asia as a spice. Despite the name, it is not related to black pepper or to chili peppers. It is widely used in the cuisine of Sichuan, China, from which it takes its name, as well as Tibetan, Bhutani, and Japanese cuisines, among others.

Sichuan pepper has a unique aroma and flavour that is not hot or pungent like black or white pepper, or chili peppers, but has slight lemony overtones and creates in the mouth a kind of tingly numbness (caused by its 3% of hydroxy-alpha-sanshool) that sets the stage for these hot spices. Recipes often suggest lightly toasting and then crushing the tiny seedpods before adding them to food. Only the husks are used; the seeds are stone-like and are discarded. It is generally added at the last moment. Star anise and ginger are often used with it and it figures prominently in spicy Sichuan cuisine. It is considered to go well with fish, duck, and chicken dishes, as well as with fried eggplant. It has an alkaline pH and a numbing effect on the lips when eaten in larger doses. Ma la (Chinese:  pinyin: literally “numb and hot”), a flavor common in Sichuan cooking, is a combination of Sichuan pepper and chili pepper.

It is also available as an oil (marketed as either “Sichuan pepper oil” or “Hwajiaw oil”). In this form it is best used in stir fry noodle dishes without hot spices. The preferred recipe includes ginger oil and brown sugar to be cooked with a base of noodles and vegetables, with rice vinegar and Sichuan pepper oil to be added after cooking.

Hua jiao yan (Simplified Chinese: Traditional Chinese:  pinyin: huÄjiÄoyÃ¡n) is a mixture of salt and Sichuan pepper, roasted and browned in a wok and served as a condiment to accompany chicken, duck and pork dishes. The peppercorns can also be lightly fried in order to make a spicy oil with various uses.

Sichuan pepper is one of the few spices important for Tibetan and Bhutanese cookery of the Himalayas, because few spices can be grown there. One Himalayan specialty is the momo, a dumpling stuffed with vegetables, cottage cheese or minced yak meat, beef or pork and flavoured with Sichuan pepper, garlic, ginger and onion. The noodles are steamed and served dry, together with a fiery sauce. Tibetans believe it can sanitize meat that may not be so fresh. In reality it may only serve to mask foul flavors. Perhaps it is because of the foul smell masking property of Sichuan pepper that made it popular in dishes made of visceral organs of slaughtered animals.

In Japan the dried and powdered leaves of Zanthoxylum sancho are used to make noodle dishes and soups mildly hot and fragrant. The whole leaves, kinome, are used to flavour vegetables, especially bamboo shoots, and to decorate soups. The buds, seeds, flowers, and hulls are also used.

Sichuan peppercorns are one of the traditional ingredients in the Chinese spice mixture five-spice powder and also shichimi togarashi, a Japanese seven-flavour seasoning.