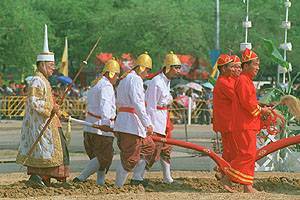 The annual Ploughing Ceremony takes place during the sixth lunar month, at the Pramane Ground near the Grand Palace in Bangkok.

One of Thailand’s most interesting events, the Ploughing Ceremony is of great importance to the country’s farmers. Thailand is basically an agricultural country, with about 80 per cent of the population farming the land. In the old days, the ceremony was held to give farmers the signal that it was an auspicious time to begin ploughing for the new rice crop.

According to the booklet “State Ceremonies and Festivals of Twelve Months”, written by His Majesty the King Rama V, the Ploughing Ceremony can be traced back to the time of Buddha more than 2500 years ago, and has been observed continuously since then. The ceremony is of Brahman origin, and the auspicious day and hour are still set by the Royal Brahman astrologers. Some Buddhist elements, however, have been added to the rites over the years.

His Majesty the King appoints a Phya Raek Nah “Lord of the Festival” as his representative to carry out the rites. On his arrival at the Pramane Ground the Phya Raek Nah is presented with three panungs (cloth worn around the hips) of different lengths, from which he chooses one.

If his choice is the longest one, there will be little rain the coming year; if it is the shortest one, rain will be plentiful. If the medium-sized cloth is chosen then the year will be one of average rainfall.

The bulls then turn a few furrows with the sacred plough, and are then presented with seven different types of foods and drinks: rice seed, beans, maize, hay, sesame seed, water and liquor. Whatever the bulls choose to eat or drink will then be plentiful during the following year.

The scattering of rice seed by the Phya Raek Nah follows the ploughing, and after the ceremony is finished, barriers are let down and hundreds of people rush to the newly-created “rice field” to gather a few grains for good luck. Even if a farmer finds just a single grain of rice, he will take it home and mix it in with his own rice seed to ensure a good crop in the coming year.