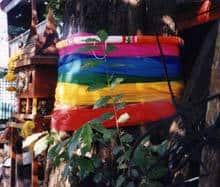 Spirits and ghosts live almost everywhere in Thailand. Most large trees are said to have a ghost or spirit living inside of it and old trees are held in particular respect. The favourite place for female ghosts to live is in a banana grove. There are many species of banana plants in Thailand, but a ‘tani’ banana grove is the preferred haunting place.

Seen and unseen forces operate in daily Thai life. Flowers, incense, or food is placed in front of shops, on the bows of boats, in front of Buddhist icons and spirit houses. Brightly-coloured ribbon is wrapped around trees or other objects. These are all offerings to the spirits that reside there. A cement pole near my house receives many gifts. There have been too many accidents at this pole and local residents are trying to placate its bad spirit. Keep your eyes open for these offerings when in Thailand and you will be amazed at how many you see.

When I told my Thai girlfriend at work I was writing about ghosts and spirits she exclaimed, “Oh! Even when you just say the word ‘ghost’ the hair on my arm stands straight up! Look!” Indeed, every hair on her arm was in the vertical position.

Most Thais wear one amulet or more. Amulets are medallions that both men and women wear around their necks and which they believe will protect them from harm or provide them with other forms of assistance. A monk might tell you that the amulet is worn only as a reminder of Buddha’s Teachings, not for protection Different amulets have different powers. Some help the wearer attract women while others offer protection against weapons. All amulets offer well-being to the wearer and help keep bad spirits away. Most amulets are given away at temples but there are some amulets which, for a variety of reasons, become very expensive over time. The reasons for this can range from simple popularity to the belief that certain amulets have very strong powers.

There are many tattooed men. Tattoos are often religious passages or religious symbols that offer protection to the wearer. The more superstitious the person, the more tattoos they are apt to have. The properties of tattoos are believed to be similar to those of amulets in the sense that they can offer protection from harm and can been seen as attractive. Tattoos have more recently become modern fashion for some of the men and women who wear them.

‘Yan’ is the drawing of religious mystical symbols to protect the area from ghosts and bad spirits. Most automobiles, taxis, and busses are adorned with ‘yan’ and amulets to ensure safe trips. ‘Yan’ is also painted on the doors of houses to keep unwanted and unseen visitors outside.

Antiques are something that foreigners constantly seek out in Thailand. I have discovered that very often, Thai people absolutely do not want to possess objects that belong to a deceased person for fear of having the previous owner’s ghost attached to the object. “Oh! Look at that beautiful desk! It would look wonderful in my living room!” my friend exclaimed at an antique shop to her Thai companion. “I would never buy that,” he answered. “I would think of the person who had to work at that desk everyday. I would wonder if they were happy then and if they are happy now.”

Asking around about ghosts provided the stories that follow.

Puthamonton is a town famous for its haunted bamboo grove. This bamboo grove is on the grounds of the Buddha Park so many monks reside and meditate there. Recently a novice monk became possessed by a ghost and was exorcised by other monks. Reports in Thai newspapers make this common knowledge to most people.

Supanburi is the home to a famous Thai country music singer Phum Phuang who died about eight years ago. When the villagers saw her ghost walking around they decided to build a shrine for her. This shrine now draws hundreds of people who try to receive winning lottery numbers from the deceased.

A cup filled with bamboo sticks with numbers written on them is shaken until a lucky stick falls to the ground. As the Thai national lottery occurs on the 1st and 16th of every month, this shrine is quite active in the days before the drawing. Pictures of this event were recently on the front page of a local Thai newspaper.

Fortune-tellers, mediums, and psychics get a lot of business in Thailand. They are not only consulted for winning lottery numbers, but also auspicious dates on which to conduct an event, or for advice in general life and love decisions.

A young couple who lived north of Ayutthaya recently committed suicide by hanging themselves. The woman was six months pregnant. A letter from the wife requested that the couple be cremated together. When the family tried to arrange this, two local temples refused to do so. Everyone was terrified that the couple would rise from the dead. They feared it was the ghost of Naan Naak returning again. A surgeon was called in and the baby was removed from the mother before the cremation could take place.

Nang Naak is perhaps the most famous of Thai ghosts. Check the link for her story…