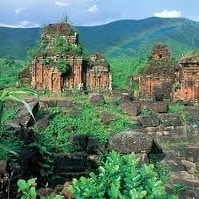 Origin of the Vietnamese people

Scholars have been constructing many hypotheses on the origin of the Vietnamese people. Some believed that Vietnamese belonged to a group of “Bach Viet” (one hundred clans of Viet) living in a wide region spreading from the delta of the Yang-tse kiang river to the South – south of China nowadays. One of them was the Lac Viet clan whose people practiced fishing and often went over to the sea. Each year, when the north wind came and blew south they crossed the sea to the southern side and sometimes reached the Indonesian islands. In their trips they got acquainted with a kind of bird named “Lac” – a kind of swan – and made it their totem. Their choice explained the name Lac Viet attributed to their clan. Around 333 BC, when Chinese invaded the area south of the Yang-tse-kiang river, the Lac Viet clan migrated to the South and settled in the area where the Melanesians were living and built up their nation, which has become Vietnam.

The hypothesis that Vietnamese were “children of the dragon and grand children of the fairy” has always been cherished by the Vietnamese people through centuries. It based its logic on myths, legends and folklore transmitted from generation to generation. A great number of historians and writers in the past backed this hypothesis in their research and writing. According to it, the Vietnamese took their origin from a bag of one hundred eggs born out by Au Co, a fairy married to a dragon, Lac Long Quan, the king of the Under-sea. The couple was separated sometime after their marriage, and Au Co led their fifty sons to the upland where they built a new nation according to the legend mentioned earlier. Those people were the ancestors of the Vietnamese.

The ancient Vietnamese society was matrilineal and without class. The groom dwelt with his wife’s family. Kinh Duong Vuong once married to Long Nu – princess of the under-sea — had to live with his wife in the under-water kingdom. Lac Long Quan, their son, lived with his mother. When he married Au Co, he would have had to live with her at her dwelling on land according to the custom. But he didn’t have this intention so Au Co had to leave him and led half of their children away.

The ancient society was without class; there were no masters nor slaves. The relation between its people was the kinship relation. A system of extended family had been applied and sustained over centuries, from the time the Vietnamese people still lived in tribes to the time they built a nation. They called each other by the role in the family, such as grandfather and grandmother, father and mother, uncle and aunt, brother and sister, even when they didn’t belong to the same line of blood. This is a custom that did not exist in other societies.

Ancient Vietnamese used to decorate their body either by painting or tattooing. They were fishermen and had to dive deep into the sea to catch fishes or to look for marine foods. They were often attacked by submarine monsters and complained it to King Hung who advised them to decorate their body so as to make them similar to the monsters’ coat and, by doing so, to avoid their attacks. From this time the practice of decorating the body began and ended only in the year 1299 AD under the Tran dynasty.

Ancient Vietnamese had their hair cut short, probably to allow them swimming and living more easily in the sea. They wore short garment with the flap closing to the left, but during festival time they wore a hat made of feathers and a long skirt decorated with strips hanging in the bottom and danced.

According to the legends, the old Vietnam territory spread farther to the North into the delta of the Yang-tse-kiang river. This nation was called Xích Qui and its ruler was Kinh Duong Vuong, the father of Lac Long Quan. They later moved south and built a new country named Væn Lang with King Hung the first, the eldest son of Lac Long Quan and also the founder of the Vietnamese nation. The dynasty of Hong Bàng marked a period for the tribe “Lac Viet” to gather and prosper. Those people hold firmly their territory and fight back against any invasion from China. Although the Chinese domination had taken place over one thousand years, it could not subdue them. They continued their own culture and many times rose up against the Chinese administration until the time they got rid of this domination in the year 939 AD in a decisive battle on the Bach ñ¢ng river. The history of Vietnam has long been a history of struggle with the Chinese imperialism, a two-pronged struggle, to avoid annexation and to avoid acculturation.

Today, on the tenth of the third month of the lunar year, Vietnamese celebrate the anniversary of death of King Hung to bestow their gratitude to an ancestor who had educated them and saved them from the threat of extermination from outside invaders.

The ancient folklore of country promote the value of relationships within the family, between fathers and sons, between brothers and sisters, and between husbands and wives. People placed sacrificed their individual rights for the common harmony. Loc Tuc gave up his thrown for the benefit of his elder brother. Au Co was separated with her husband but still kept intact love and feeling. To compare this value to many legendary tales of other countries that are full of hatred and killing within family, one must acknowledge their positive effects on the people.

On the psychological side, the legend of King Hung and folk-tales served as a strong support for the Vietnamese people to get over the complex of being treated as uncivilized as the Chinese often foisted to their neighboring countries. The Vietnamese took their origin from a dragon – the leading of the four sacred animals – and a fairy symbolized by the bird they chose as their totem – a bird called “Lac” or “Hong”, a kind of swan or sea bird, whose familiar figure decorated their dwelling.

Even though the legend of King Hung might sometimes be deemed as fictional story transmitted orally over centuries and subjected to possible distortions, it could at least help the Vietnamese to better understand their ancestors. At least, the strong will of their ancestors to overcome the threat of Chinese acculturation merits to be engraved for ever into their collective memory.