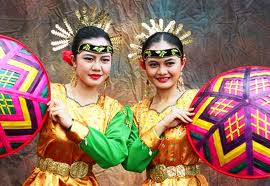 The official language is Malay. Other languages include English and Chinese (various dialects).

Brunei’s culture mainly derived from the Old Malay World, which encompassed the Malay Archipelago and from this stemmed what is known as the Malay Civilisation. Based on historical facts, various cultural elements and foreign civilisations had a hand in influencing the culture of this country. Thus, the influence of culture can be traced to four dominating periods of animism, Hinduism, Islam and the West. However, it was Islam that managed to wound its roots deeply into the culture of Brunei hence it became a way of life and adopted as the state’s ideology and philosophy.

Brunei Darussalam is richly endowed with cultural heritage steadfastly maintained until today. The setting up of the Arts and Handicraft Centre in 1975 is a living testimony as to the preservation and the proliferation of the arts and crafts of the bygone days which Brunei was renown for such as boat making, silver-smithing, bronze tooling, cloth weaving as well as mat and basket weaving. Relics and other various artistic heritage of Brunei Darussalam besides the ones mentioned above include Malay weaponry, wood carvings, traditional games, traditional musical instruments, ‘silat’ (the traditional art of self defence) and decorative items for women. Some of these are kept in the Brunei Museum and the Malay Technology Museum; not only for the world to see but most importantly for today’s generation to admire and be proud of, for future generation to emulate, perhaps and something to remind us of our forefather’s natural skill, creativity and innovativeness which over generations has been ingrained as one of the richest traditional culture in the Malay world.

The life of the average Bruneian revolves around his religion, Islam, with certain things being forbidden (haram), certain things tolerated but not encouraged (makruh) and certain things which fall under the embrace of Islam (halal). Pork, the consumption of alcohol, eating meat not slaughtered under Islamic guidance, casual touching, adultery, and coming into contact with the wet nose or hair of a dog are baram. Smoking and eating shellfish are considered makruh. Bruneians shake hands by only lightly touching hands and then bringing the hand back to the chest; it is not customary to shake hands with members of the opposite sex. You should not point your finger, instead use the thumb of your right hand with the four fingers folded beneath it. To call a taxi or attract someone’s attention, wave the whole hand with the palm facing down wards. Do not smack the fist of your right hand into your left palm, because it has a different meaning in Brunei to that of Western countries. When visiting a mosque, you should always remove your shoes first and you should not pass in front of a person at prayer or touch the Koran. Women should cover their heads and not have their knees or arms exposed. Gifts and particularly food should only be passed with the right hand, although it is acceptable to use the left hand under the right wrist for support.

Golf, bowling, squash, tennis, swimming, badminton, snooker, windsurfing, soccer, aerobics and traditional sports such as gasing, sepak takraw and kite-flying are just some of the wide variety of sports and recreational activities available in Brunei. The country has good facilities to accommodate many of these.

Golf: Golf is a popular game in Brunei with an international-standard 18-hole par 72 golf course at Brunei Muara District. It is situated at Jalan Pengkalan Sibabua. There are other courses at the Royal Brunei Golf, the Country Club at Jerudong Park, and the Panaga Golf Club in Seria. For those interested in practicing their game, there is a driving range at the Royal Brunei Sports Complex near the Airport.

Bowling: Bowling enthusiasts can head on down to the Utama Bowling Alley on Jalan Tutong in the capital city.

Tennis: Name your surfaces: Clay? Synthetic grass? Cement? You can find these courts at the Youth and Welfare Sports Complex on Jalan Berakas.

Swimming: For a small entry fee, you can access the public swimming pools at the Hassanal Bolkiah National Stadium in Bandar Seri Begawan and at the Mumong Sports in Kuala Belait.

Squash: You can enjoy a game of squash at the public courts at the National Stadium. The courts are open daily except on Fridays and Sundays. Bookings can be made at the stadium for a moderate fee.

Windsurfing and Kayaking: Hire your boards at the Royal Brunei National Wind Surfing Association at Serasa Beach and surf your hearts out! For those who want a gentler watersport, you can also hire kayaks from the same place.

Snooker: There are a few snooker clubs at various places at the heart of the city.

Scuba Diving: The dive club meets at the Anggerek Desa swimming pool in Bandar Seri Begawan on Monday nights at 8 p.m. it is an active dive club. If you would like to go for a dive, there are private operators who run boat trips to Brunei Bay at weekends. They also offer kit hire, guided dives and courses.