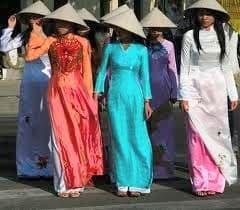 In feudal Vietnam, clothing was one of the most important marks of social status and strict dress codes were enforced.

Commoners had a limited choice of similarly plain and simple clothes for every day use, as well as being limited in the colors they were allowed to use. For a period, commoners were not allowed to wear clothes with dyes other than black, brown or white (with the exception of special occasions such as festivals), but in actuality these rules could change often based upon the whims of the current ruler.

The Áo t? thân or “4-part dress” is one such example of an ancient dress widely worn by commoner women, along with the Áo y?m bodice which accompanied it. Peasants across the country also gradually came to wear silk pajama-like costumes, known as “Áo cánh” in the north and Áo bà ba in the south.

The headgear of peasants often included a plain piece of cloth wrapped around the head (generally called Khan d?ng), or the stereotypical Nón lá (conical hat). For footwear peasants would often go barefoot whereas sandals and shoes were reserved for the aristocracy and royalty.

Monarchs had the exclusive right to wear the color gold, while nobles wore red or purple. Each member of the royal court had an assortment of different formal gowns they would wear at a particular ceremony, or for a particular occasion. The rules governing the fashion of the royal court could change dynasty by dynasty, thus Costumes of the Vietnamese court were quite diverse.

The most popular and widely-recognized Vietnamese national costume is the Áo dài, which is worn nowadays mostly by women, although men do wear Áo dài on special occasions such as weddings and funerals. Áo dài is similar to the Chinese Qipao, consisting of a long gown with a slit on both sides, worn over silk pants. It is elegant in style and comfortable to wear, and likely derived in the 18th century or in the royal court of Hu?. Áo dài is made compulsory in many senior high schools in Vietnam, and some colleges. Some female office workers (e.g. receptionists, secretaries, tour guides) are also required to wear Áo dài.

In daily life, the traditional Vietnamese styles are now replaced by Western styles. Traditional clothing is worn instead on special occasions, with the exception of the white Áo dài commonly seen with high school girls in Vietnam.