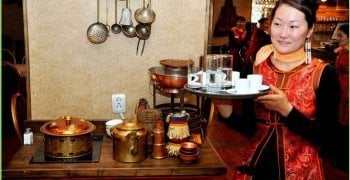 A stroll down any Mongolian residential street is usually the first introduction to a visitor of the savoury odours of the traditional meals of this country. If you are invited into somebody’s ger (or traditional tent dwelling) or apartment, you will probably have an opportunity of tasting buuz, khuushuur and bansh. These Mongolian national meals are made with minced meat seasoned with garlic or onion (it can be anything from mutton to beef to camel to horse to gazelle) covered with flour and steamed in boiling water, fried in oil and boiled in water. For many visitors to the country the vast quantities of meat consumed can at first be surprising. But it is not long before a visitor finds their favourite Mongolian food, be it buuz, khuushur or a number of other treats. A Canadian living in Ulaanbaatar once told me, “the Mongolian national food contains a lot of meat, but I like the buuz.”

The hierarchy of foods in the Mongolian diet

The meat-dependent diet arises from the need for hearty food to stave off the cold and long winters. Traditionally nomadic herders, Mongolians have for centuries been dependent on mostly animal products for their dietary staples. Now after over nine years of transition, the traditional diet has been used as a shield against hunger and for the wealthy, subject to the influence of imported foreign foods and cuisine. When the Russians pulled the plug on Mongolia’s aid in 1991, the economy went into a severe crisis. For many Mongolians it was their first experience of serious hunger. The staple traditional diet of meat, milk and flour saw many people through this crisis, when food imports from the former Soviet Union dropped off.

Mongolians traditionally have turned to foods that are high in protein and minerals, relying less on more seasonable foods like vegetables and fruits. This means a diet heavy on meat and dairy products, the latter when sour in the summer time thought to clean the stomach. It isn’t just about meat though. Mongolians do also eat cereal, barley and natural fruits and plants native to the country.

Out of necessity Mongolians have found creative and ingenious ways to use the milk of all five of the domestic animals in the country: sheep, cattle, goats, camels and horses. Orom is the cream that forms on top of boiled milk; aaruul are dried curds and can be seen baking in the sun on top of gers in the summer; eetsgii is the dried cheese; airag is fermented milk of mares (female horses); nermel, is the home-brewed vodka that packs a punch; tarag, is the sour yogurt; shar tos, melted butter from curds and orom, and tsagaan tos, boiled orom mixed with sometimes flour, natural fruits or eesgii. The method of drying the dairy products is common in preparing them. The Mongolians prepare enough dairy products for the long winter and spring.

The traditions of using, producing and preparing these foods are stronger outside the main cities, where the population is more reliant on the vast herds for food. B. Baljmaa (Mongolians generally use their first names), a dietitian and nutritionist at the National Nutrition Research Centre, says there is a genetic compatability for the food.

“Before 1992 there wasn’t much research in this area. But now we know from our research that Mongolians are better able to absorb foods with more acid. So, traditional food should be kept in the country.”

Since 1997 Mongolians have seen a substantial increase in the variety and quantity of imported foods, many of which were only thought of as exotic 10 years ago. Since the start of 1999 the Soviet-style market stalls now compete against western-style supermarkets, with trolleys and shelves proudly saying “Made in Mongolia.” In markets like Dalai Eej, Dorvon Uul, Food Land and Mercury it is possible to buy delicious prepared and canned foods, candies, biscuits, and unknown and unused before by Mongolians, products like oranges, bananas, plums and American chickens.

On top of the canteens and cafes serving Mongolian food, there are now many restaurants, canteens, bakeries and tea shops which serve meals from Russia, Italy, India, China, Japan, Korea, England, France, Senegal and Turkey. Most of these restaurants are located in the capital, Ulaanbaatar. Mongolians have taken to the new tastes. “I think Mongolians like roasted chicken and fish when they go to the foreign sit-down restaurants, and hot dogs and pizzas in the fast foods shops,” says I. Narantsetseg and her husband J.Battulga. Both were dining in the Seoul restaurant, and are happy they can go out for food: “it is a very good thing that there are opening a lot of restaurants where friends and family can go and enjoy food in comfort.”

Isobe Hiroshi, manager of Seketei, a high-end Japanese restaurant, told me “only 20 per cent of our customers are Mongolians. The vast majority of our clients are foreign, especially Japanese people who are working and traveling here. I think Mongolians have still not grown used to sushi and sashimi, the raw fish prepared in our restaurant. But I hope we will welcome more and more Mongolians in the future.” The traditional diet in the cities is more changed, more european. And with comes its own dangers for Mongolians says the Nutrition Centre’s Baljmaa:

“There is a big problem of importing poisonous foods and food which probably will cause the nutrition-related diseases common in more developed countries,” she continues.”While the trend around the world amongst health-conscious people is towards natural products for their food, some Mongolians use some food which can cause troubles for their health. For example, fast food made with more oil, salt and sugar are considered the biggest dangers for human health. On the plus side prices for these imported foods are higher and only the wealthiest people can afford them; the poor people can’t buy and eat it no matter how much they desire. This means their poverty is protecting their health. We should boost our efforts to raise awareness on what foods protect your health.”

Help in improving nutrition awareness a poster protraying a ger details the food habits of Mongolians and the nutritional value of common foods.

From ancient times, Mongolians use abundant and peculiar methods of processing meat and preparing food.. One of the more popular methods of processing the meat is to prepare borts (dried meat) for use in winter. Borts is made from the meat of cows, goats and camels. Here is a recipe for camel borts presented by Dr. Sh. Tserenpuntsag who engages in the research of the meat.

If soaked in water, the meat will expand up to two and half times in size. It should then be cooked for 18 minutes.

Mutton, in various forms – boiled, stewed, as a filling for steamed dumplings, cooked with fat and flour, or served with noodles – is the staple national dish, to such an extent that the smell is inescapable, and travellers often complain of smelling of it for weeks after their return from Mongolia. In whatever form it comes, it is almost always very greasy, and very plain. The Mongolians don’t believe in using much seasoning, so it may be an idea to bring your own if you want to spice things up a little. The reason for this fatty, high protein food, is that the nomadic Mongolians traditionally need the winter flab to get through their long, cold winters.

Mutton products are often supplemented with a variety of dairy products made from yak or horse milk, including the dubious delicacies of dried milk curd, and fermented cheese. Dairy products also form the base of Mongolia’s two main alcoholic specialities, nermalike, a kind of vodka distilled from yoghurt, and airag, made from fermented horse’s milk. The main non-alcoholic drink is suutei tsai, a kind of salty tea, made from a combination of hot water, mare or yaks milk, butter, rice, lots of salt, and possibly some tea. Salty tea is drunk in large quantities before eating as it’s believed to aid digestion.

For variety from mutton, you could always try horsemeat, particularly popular in Western Mongolia, or roasted marmot. Marmot hunting is a traditional nomadic past time. They are killed and cooked whole, without puncturing their skin. Cooked from the inside out by stuffing with hot rocks, while fur is singed off with a blowtorch. The animal puffs up and the arms and legs extend as steam and the stones cook the marmot from the inside. It is then eaten, and washed down with mare’s milk.

Extreme seasons make growing vegetables extremely difficult, so they are very hard to come by, except onions, swede, and other root vegetables that grow in harsh conditions and last for a long time. This of course makes maintaining a vegetarian diet in Mongolia very difficult, and vegetarians may find themselves living on rice and Mongolia’s almost unpalatable cheeses.

For a typical Mongolian eating experience you could go to a Guanz, a sort of Mongolian canteen, which is commonly found in towns and beside roads, and serves cheap food for workers. Breakfast and lunch are the most important meals of the day, and they serve the usual collection of national staples.