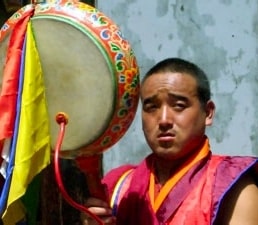 The State religion is Drukpa Kagyupa a branch of Mahayana Buddhism. It has been institutionalised in the Dratshang (Central Monk body), headed by the Je Khenpo (Chief Abbot) who is chosen from among the most learned lamas and enjoys an equal rank with the King. Bhutan is the only country in the world to have adopted Mahayana Buddhism in its Tantric form as its official religion. The Buddhist faith has played and continues to play a fundamental role in the cultural, ethical and sociological development of Bhutan and its people. It permeates all strands of secular life.

The country of Bhutan, nestled in the Himalayas, is truly a magical place. The magnificence of the landscape match with its varied cuisine that is as mystique as the land itself.

The people of Bhutan love to eat and every region has its own specialty. Bhutanese affinities for Yak meat is well known, but they also relish a completely vegetarian dish made of humble cheese and chili. This special dish is known as ‘Ema Datshi’. It is said that a trip to the Dragon Kingdom is incomplete without tasting this delicacy. It is undoubtedly tasty but very, very hot.

Yes! The Bhutanese are passionate about chili. The species of chili used here is Capsicum onum, a fluffy red variety. The entire country seems to sing “Without chilies we die”. Chillies are spread all over – on the roadsides, on rooftops and on the courtyards. The huge baskets of chilies at the market put to shame the bursting pumpkins, white radish, potato, cabbage, cauliflower and beans.

The Bhutanese do not add much spice to their curry, the only ingredient being chili, chili and lots of chili. “If it does not make you sweat, then why ever bother to eat?” they ask. Therefore, the taste of Ema datshi or the Zhan-s-pa (pronounced Zhasappa) at a Bhutanese household may not be to your liking. The variety served in restaurants is less hot and spiced to make it more palatable to external tongue.

Another important feature of this exotic cuisine is the use of rice. Five kilograms per head per week is the normal consumption. As this is the only crop cultivated, rice finds its way in various forms from breakfast to dinner. It’s either rice with curry or curry with rice.

Two categories of rice are used in Bhutan. The urban areas including Thimpu, Paro and Phuntsholing use the white rice while the rural population use the red rice (the grained variety). Rice based delicacies include ‘Desi’, a tasty mixture of white rice, butter, sugar, golden raisins and saffron and ‘Zow’ or fried rice mixed with sugar, butter and sometimes oilseeds. Both these are the favorite of His Majesty King Jigme Wangchuk and are served on special occasions.

In eastern Bhutan, some wheat is cultivated and the staple diet is ‘Puta’ or wheat noodles. In most families of Southern Bhutan, corn kernels are dried in bamboo shoots and then ground coarsely to make ‘Kharang’. This is then added to the leftover curry and made into a ‘Thukpa'(porridge) style breakfast.

The rice is served in a special tightly woven bamboo bowl called ‘bangchung’ made in the Kheng province. This is a lovely souvenir from Bhutan and can be used as a wall decoration.

Meat, especially Yak meat, is a staple food for the non-vegetarian. Yak is a common sight in every household. Not a single part of the animal is wasted, similar to the banana plants in India. Beside meat, their milk is dried and made into cheese, even the skin is fried and served as a snack with drinks.

The Yak herders come down from the highlands in autumn and sell meat, butter and cheese to villagers in exchange of rice to last them a full year. The average meat an adult Yak yields is 250 to 260 kg. It also produces 1 kg of butter and an equivalent amount of cheese in three to four days. The locals sometimes hang thin strips of yak meat in the courtyard to be dried in the hot sun and stored for use in the winter. “The dried variety is more delicious”, quipped a village woman on enquiry.

The common preparation of meat is ‘Pa’, a curry. Large chunks of meat are mixed with lots of vegetables and chilies and boiled for a long time to make a curry. Turmeric or other spices are not used, leaving the curry white.

‘Zhasonpa’ is prepared in the same manner, except chicken pieces (Zhason) are used instead. This specialty can be tasted … obviously without the chilies.

Bhutanese also love ‘Momos’. Though a Tibetan specialty, it has occupied a permanent place in the Bhutanese culinary. Chicken or Pork Momos are favoured but cheese Momo is most common.

Coming back to ‘Ema Datshi’. Here is the recipe in brief.

To make the cheese, pour boiling water to the liquid yogurt left in the butter churn after the butter is removed. Stir gently till it turns into a soft yellow paste that is fried with butter and sugar to get the ‘Datshi’. Finally, add chili, salt and cook with the Datshi to make a curry.

Sometimes the Datshi is dried for a few more days to make it hard. It is then cut into pieces, stringed and kept over fire for three to four months (yes!) and Wow! The stone hard chewing gum is ready. And this is what the Bhutanese chew all the time. They say it helps to keep the body warm. We tried but threw it out in no time due to its pungent odour. Repeated persuasion by our guide could not change my opinion even when the temperature fell to -7 degrees.

How do they wash down all these hot, spicy delicacies? The answer is simple. Either with drink or with Tea. The Bhutanese can drink ‘Suja’, butter tea or ‘Ara’, a locally made wine. Ara is made from any grain cultivated in the region, rice, wheat or Barley. In traditional feasts an unusual snack is offered. Butter is heated with egg and Ara is poured over the whole offering.

In the Northern District of Ha and Lingzhi, another queer dish is prepared from Yak haunch. The entire haunch is wrapped in a cloth and kept for two to three months and then served with chilies and wine.

In the Kheng region, raw meat is served with drinks and on special occasions, the whole village participates in the feast.

In Bumthang, a rare tea is made from a parasitic plant ‘Neshing Jurma’, that grows on Oak trees while the predominantly Nepalese area of Southern Bhutan savour ‘Shel Roti’. Salt and sugar is added to rice flour and made into a paste, which is then fried, in bubbling hot oil.

These days however, the Urban Bhutanese are tilting towards the Western type of food and even the rural population is not interested in this laborious process. But in festivals, weddings and other traditional gatherings they always go for the cuisine of the land.