India’s cuisine is as rich and diverse as her people. The spectrum of Indian cuisine can be said to lie between two dietary extremes:

India is well-known for its tradition of vegetarianism which has a history spanning more than two millenia. However, this was not always the case. During the Vedic period (1500-500 BC), the priestly castes sacrificed animals to appease and gain boons from the gods, after which the flesh was consumed. But the trend of meat-eating shifted with the times. The anti-meat eating sentiment was already felt at the end of the Vedic period. This period also saw the rise of Buddhisln and Jainism, the founders of which abhorred the practice of sacrificing and consuming the flesh of animals, preaching the principle of ahimsa or ”non-harming”.

To win back these converts into their fold, the Hindu priests advocated against killing, their public appeal beginning around the Ist century BC. They embraced ahimsa and followed a vegetarian diet, regarding it as superior to the Brahminical ideas of sacrifice. Advocating this new doctrine, however, did not meet with great opposition from meat lovers as there had already been a religious attitude towards animals since Vedic times. In fact, only the meat of a sacrificed animal was considered food. Among the animals that were sacrificed in Vedic times was the cow, which is virtually deified in the Hinduism of today. 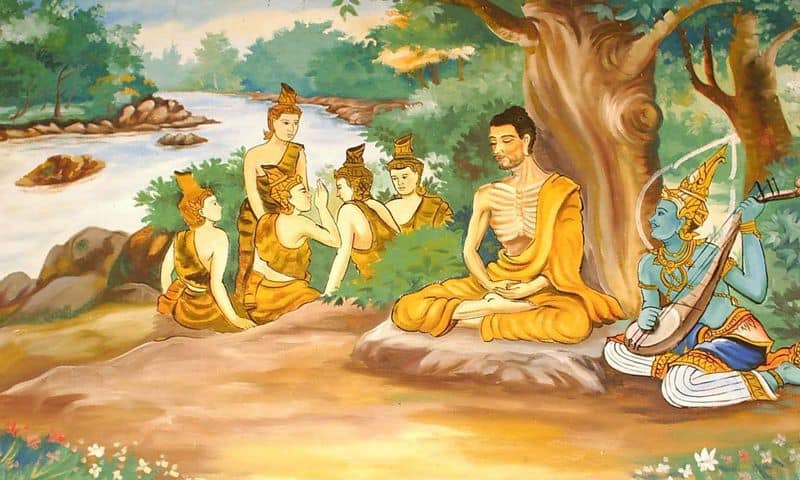 In the Atharvaveda, beef-eating was prohibited as it was likened to committing a sin against one’s ancestors. But at the beginning of the Epic period (c.l000- 800 BC), this meat was said to be common food that added vigour not only to the body but also to the mind. The tables were turned in the 5th century BC in favour of the cow.

When it was discovered at this time that the cattle population was decreasing at an alarming rate, people began to realise that a live cow was a greater asset than its carcass. Since ghee (clarified butter), milk and yoghurt were vital for temple rituals, this animal began to enjoy a greater prominence and thus, its flesh became a prohibited meat.

This was the start of the taboo of eating beef which has become a long-standing feature in Hinduism. But vegetarianism goes one step further than the avoidance of beef. Throughout India’s history, there are occurrences of vegetarianism being practised.

For example, there is evidence that in 800 BC, people began to eat more vegetables, pulses, cereals and fruit, as a consequence of the growing distaste for meat. Even the priestly castes of some areas that took to vegetarianism began to offer vegetarian foods to the gods. That kings such as Ashoka (c. 322-183 13C) forbade the killing of animals further contributed to the development of vegetarianism.

But the adherence to vegetarianism or a sattvik diet was not restricted to the Brahmins. From northern India, orthodox Brahminical values and hence vegetarianism made its way beyond the Vindhya Mountains establishing itself in the south. Here, it gained immense popularity even amongst the non-Brahmins who deemed it as leading a meritorious lifestyle.

The Brahmins continued their vegetarian fare for different reasons, excepting garlic and onions which were thought to arouse passions. A vegetarian diet for them meant that their minds would be pure to conduct the necessary rituals. However not all Brahmins are vegetarians. A classic example would be the Kashmiri Brahminss who continue to pride themselves on their mutton dishes. There are also the Brahmins of Bengal who eat fish. Thus vegetarianism became more linked with the cuisines of southern India rather than the north.

This general demarcation in food patterns persists in present-day India and can be explained. As India has been the crossroads of many peoples and cultures over centuries, foreign elements have invariably seeped into its culinary culture, sometin1es displacing or modifying local cuisines. One such foreign influence was the Muslims from western Asia whose culture swept across much of northern India in the 16th century. The invasion brought changes in many aspects of everyday life in India, including the palates of the Indian people which became tempered by a foreign taste.

Muslim infiltration into the subcontinent caused a gastronomic revolution. In fact, it created a marriage between the non-vegetarian fare of the Middle East and the rich gravies that were indigenous to India, creating what is known as Mughlai cuisine. Spices were added to cream and butter, rice was cooked with meat, and dishes were garnished with almonds, pistachios, cashews and raisins. India was also introduced to kebabs and pilafs (or pulaos). There was a variety of sweetmeats; the idea of ending the meal with a dessert being of Arabic origin. Most of these sweets were made of almonds, rice, wheat flour or coconut, sweetened with sugar and scented with rose-water. 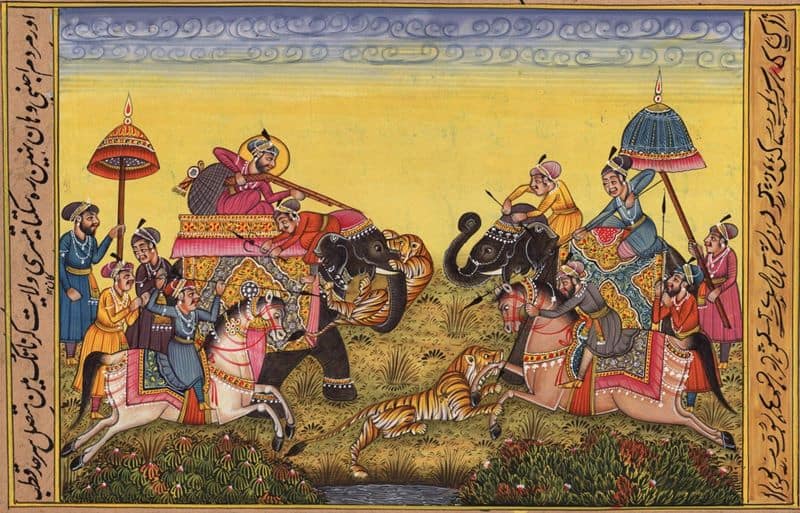 The Mughal Emperors were of course great patrons of this style of cooking. Lavish dishes were prepared especially during the reigns of Jahangir (1605-27) and Shah Jahan (1627-58). In miniature paintings of this period it can be seen that the vessels used in court banquets included ones of jade, silver and Chinese porcelain.

Relations between Muslims and Hindus were cordial especially during the early Mughal period. Converts to Islam changed their diet but the majority of the Hindus tended to be vegetarian excepting the Kshatriya castes and royal families who relished meat. Besides being vegetarian, the Hindus also prepared their foods differently.

While the Muslims enjoyed naans cooked in an oven and chapatis prepared on griddles, the breads of the Hindus consisted of puris (made from wholewheat flour and oil) and bhaturas (made from white flour, yeast and oil). The latter were deep-fried in a pot resembling a wok called the karhai. Ideally such breads were deep-fried in ghee as it was a pucca or pure food. But ghee was only used by the rich; the poor had to be content with using sesamum or mustard oil. Dhal curry or sambar, was popular and has survived to this day. In the areas where rice was a predominant cereal, pancakes called dhosakas or dosas were made.

Styles of eating differed between the Hindus and the Muslims. In contrast to the Muslims, the Hindus usually took their meals individually, a feature that may have developed as a result of rules regulating eating practices across castes. The Muslim stress on brotherhood spilled into the dietary arena as communal eating was the norm. A dastur khan consisting of a fine white calico cloth was spread on the floor, over which was placed the various dishes of the meal.

It was customary to eat with the fingers which were washed in a sailabchi before and after eating. But for serving and carving, there were spoons and knives. To end a hearty meal, the Muslims, like their Hindu countrymen, chewed paan or the betel quid. This postprandial habit symbolises hospitality extended by the hosts to the guests.

Although the Mughals did not sustain power for long, their food habits have continued to this day. Mughlai cuisine, although emphasising meat, co-exists with vegetarianism. Like all other facets of life, India’s culinary tradition is constantly changing in relation to vegetarianism and non-vegetarianism whereby adherence to a specific food habit becomes a powerful symbol of caste, ethnic group and religious orientation.