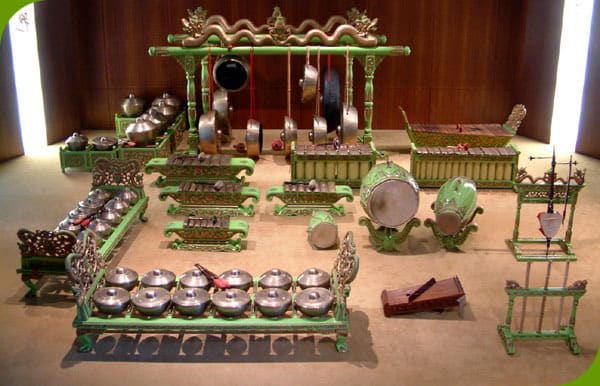 Instruments of a gamelan orchestra

There are also two sets of instruments that are tonal: the slendro tuned to five tones and the pelog, tuned to seven tones. The slendro is used to suggest festivity or cheerfulness, and is believed to have developed in Java in the eighth century. The pelog is used to express sadness, and is also very ancient in its origins. These two cannot be played together, but are used according to the mood of the piece being played.

Gamelan music is complicated. It is an ancient form of music and has been handed down for many generations, never written down, but learned by being played. Gamelan is an essential part of Indonesian life. It is slightly different from island to island.

Another popular form of orchestral music is the angklung, which is played on instruments made entirely of bamboo of different lengths. Each instrument is made up of two bamboo tubes, each of a different note. The instruments are shaken to produce sound.