Sauce can be defined as a cream, liquid or semi solid food. It is usually used when preparing dishes. Although most of the time, a sauce is not entirely consumed as a “sauce” but rather used to add flavor and even appeal to foods or dishes. In Singapore, most of its dishes are paired with rich and flavorful sauces. This means that foods and condiments always goes together. Can you just imagine eating one of Singapore’s popular dish, Har Cheong Gai (Shrimp paste chicken) without a dipping sauce on the side? In today’s post, we have gathered different types of Singaporean sauces that will surely add a little twist to your Singaporean dish.

There are different cuisines across the globe such as Italian cuisine, Thai Cuisine, Singapore Cuisine, Japanese and Mexican Cuisine as well as Chinese cuisines. To add flavor and taste to each of these cuisines, condiments and sauces are incorporated to the dishes. Sauces are important to dishes simply because it provides the dish its flavor, its moisture as well as gives contrast to a dish color and texture.

Listed below are some of the most popular Singaporean sauces.

The Final Destination is considered to be the spiciest versions amongst the different products from Mofo Chili. It is often described as a the smoldering choice for the fearless simply because it is recommended only for the brave.

Its level of spiciness is at Level 10, which mean the most spicy. The spicy burn should lasts about 5 seconds and typically disappears at about 10 seconds after. Keep that in mind when using it as a marinade as it will surely give your marinade meat that very spicy kick.

This Mofo Chili variety is a Halal, vegan as well as keto friendly sauce.

Listed below ate Mofo Chili products with level of spiciness: 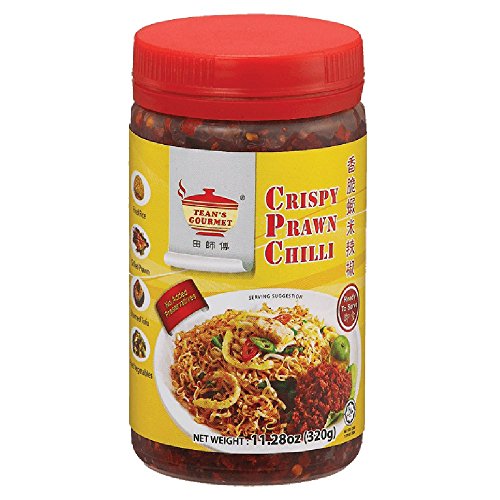 It has a slightly pungent smell but there’s a balance between spiciness and sweetness that’s perfect for simple dishes such as fried rice, grilled prawns, noodles and spaghetti as well as use it in stir-fry vegetables.

The Pumpkin Black Pepper dressing by Mekhala living is made from beta carotene laden pumpkins. Considered to be a healthy dressing since it does not contain artificial preservatives nor artificial colors and flavor. One good thing about this dressing is that it is gluten-free.

If you are looking for an alternative to your pasta sauce, this dressing is perfect as a substitute. 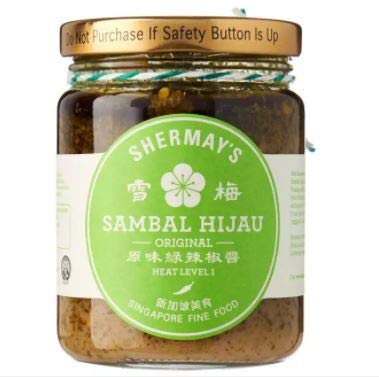 Shermay’s Singapore Fine Food Sambal Hijau is known for Cabe Ijo (Indonesia). It is traditionally eaten with Nasi Padang and Nasi Campur. Nasi Padang or Padang rice is a steamed rice that is mostly served with pre-cooked dishes, while Nasi Campur or also known as Nasi rames is an Indonesian dish of nasi puti (white rice) with other dishes and meats with mixtures of vegetables, eggs and often with peanuts.

Sambal Hijau is a green chili sauce that goes well when eaten with chicken, rice dishes and stir fried dishes. Also, the best way to eat this is by using it as a dipping sauce for prawn crackers or Keropok and Bitternut Crackers or Emping.

The Five Spice Blend by Anthony The Spice maker is another popular Singaporean Sauces that is made by its 5 main ingredients such as Cinnamon, Fennel, Star Anise, Clove and Sichuan Pepper.

It is often used in slow cook dishes such as Braised pork belly and used as a marinade for roasting meat and often used to stif fries and stews as well.

An all naturan, no MSG and no Preservative sauce.

The Black Garlic Butter by Slake is made by using its 4 main ingredients such as black garlic, butter, dry soy sauce and Pepper.

This garlic butter sauce will definitely add to the richness and creamy flavor and taste not only to your grilled meats but to your vegetables as well.

Sambak Bajak by Violet Oon Singapore is a chili sauce that is made by shallots, shrimp based sambal (Belacan) and garlic.

This chili sauce will surely add sizzle and spark to dishes such as fried tofu and other delicious meals that includes seafood and meats.

The Saffron Kaya from Ujong Gourmet uses Spanish saffron and flower honey that generally lifts the coconut jam gourmet. It is has a yellow-orange color. It is a gluten-free Singaporean sauce that also contains egg.

Soy sauce is the most popular and widely used sauce not only in Singapore but in other cuisines as well. A high versatile sauce that boosts the taste of the food and can also be used as an alternative to salt in dishes such as soups, stir-fries, and congees.

Tai Ma Premium Soy sauce is popularly known as light soy sauce or often called as Sheng Chou. A sauce that originates from China but is now gaining its popularity in different countries. The sauce is made by fermenting grains, soy beans and grains for a longer period of time.

It is characterized as having golden brown color but with a watery texture. Since it has as strong umami and aromatic flavor, it is best use for as a dipping sauce, as a dressing, used to marinade or can simply be used as a seasoning.

This thick dark sauce is usually used to darken dishes, and most of the time used to pair it with dipping sauce. For this sauce to release its flavor, it simply needs to be heated.

For Singapore cuisines, dark soy sauce is used to mix with boiled eggs or as a side dipping sauce used in butters,

Often, dark soy sauce is used in dishes such as cooked pork and other red cooked dishes as well.

Oyster sauce is another popular Singaporean sauce made by boiling the oysters and seasonings such as soy sauce and garlic. Although there are other version that uses caramel.

Oyster sauce has a thicker consistency as compared to dark soy sauce mentioned above. It has a rice umami flavor similar to the mixture of barbecue sauce and soy sauce.

The word Mala comes from the Chinese character “Ma” which means “to numb” and “La” which means spicy. Therefore, this is a sauce that give hot and numbing taste to Singaporean cuisine.

Fermented Bean Paste is not only used in Singaporean dishes but in other cuisines as well. In Korea, there’s what they call Doenjang and Cheonggukjang. While there is Miso in japan, there is also Doubanjiang in China.

What is Singapore’s national dish?

Chicken Rice is the national dish of Singapore. It is usually cooked using chicken stock and is typically served with sweet soy sauce, ginger and chili sauce.

Why is storage of sauces important?

It is especially important to know how to properly store your sauces. Proper storage helps preserve the quality and the nutritional aspect of you sauce. As you may already know, the taste and quality of the food is greatly affected if the sauce is not properly stored that could to bacterial growth that could also affect our health.

How to prevent spoiling your sauces?

Aside from properly storing the sauce to prevent it from spoiling, other methods used can also help prevent the sauce from spoiling. Most of the sauces, once opened is required to be placed inside the refrigerator, even some are required to be stored in the freezer. However, there are some with just storing in a small jar covered with plastic and place in the refrigerator is simply enough. Just make sure that the sauce is not exposed to air.

We have mentioned in this post the most popular Singaporean sauces that are frequently used in most of the recipes in Singapore cuisine. Although, aside from the one’s mentioned, there are still a lot more of sauces available, each of the sauces typically add a different flavor and taste to the meal that you are making.

Why not try and experiment different sauces to add to your dish to know which one will suit you best. Let us know what you think.