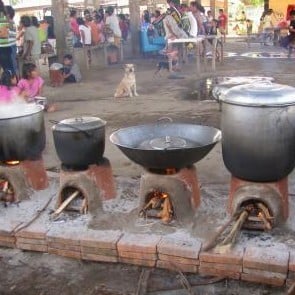 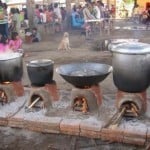 Philippine cooking is surprisingly simple; no special utensils are needed. Even a wok, which is commonly used in the Philippines and is almost essential for Chinese cooking, can be done without for most Philippines dishes.

No special skills are needed, either. If you can prepare American dishes, you can prepare the food of the Philippines. In fact, most of the dishes that follow are either sauteed or stewed. Other dishes are boiled, braised or fried. Baked dishes are rare, which is perfectly sensible for a tropical cuisine.

Two styles of preparing food in the Philippines are part of the cuisine not only because of their delicious taste but also because they keep well without refrigeration. Dishes cooked adobo or sinigang style are preserved because of the effect of vinegar or souring ingredient. In rural tropical areas, this makes storing leftovers possible. Dishes prepared in both these manners seem to improve when stored, so it is a good idea to prepare large amounts to ensure having leftovers. In many of the recipes that follow, vegetable ingredients that are used may be difficult to locate in ordinary food stores or supermarkets. But most major metropolitan centers have “chinatowns” or Oriental neighborhoods where all the ingredients can be purchased. In small cities, “Oriental stores” can often be located by checking the local Yellow Pages under Oriental or Filipino stores. One of the ingredients that may prove difficult to locate is patis. Patis is a very salty, thin, amber-color fish or shrimp sauce that is sold in bottles under various brand names. Nuoc mam is the Vietnamese equivalent, and nampla is the Thai equivalent.

Though patis is commonly used in many dishes in the Philippines, it is marked as an optional ingredient in all the recipes in this book because the flavor it imparts takes some getting used to. Its pungent odor and strong flavor put it into the category of “acquired tastes.” Salt is its closest and best substitute.

Among the other ingredients commonly used in Meat Dishes that are not readily available in local food markets but that may be found in Oriental or Hispanic food stores are the following:

Other Oriental ingredients such as bean curd, Chinese cabbage, a Chinese vegetable called bak choy and even some Chinese egg and bean noodles are now available in local food markets in big cities on the East and West coasts of the United States.

Even though some of the more exotic vegetables called for in some dishes simply are not available in the United States, adequate substitute are everywhere. For the most part, all the ingredients and spices can be found in a well-stocked food market.

(Excerpted from The Philippine Cookbook by Reynaldo Alejandro.)